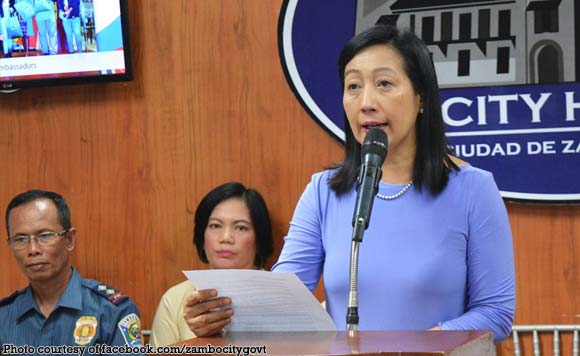 0 300
Share
Want more POLITIKO News? Get the latest newsfeed here. We publish dozens and dozens of politics-only news stories every hour. Click here to get to know more about your politiko - from trivial to crucial. it's our commitment to tell their stories. We follow your favorite POLITIKO like they are rockstars. If you are the politiko, always remember, your side is always our story. Read more. Find out more. Get the latest news here before it spreads on social media. Follow and bookmark this link. https://goo.gl/SvY8Kr

The Zamboanga police have arrested the two suspects in the murder of Patrolman Pedro Umpad.

The alleged gunman identified as Madzlan Abdurajak Saruana, 31, was nabbed at Tripplet, Canelar, Zamboanga City, while the driver of the motorcycle identified as Alsid Jackaria Ismail, 19, was apprehended near the parking area of West Metro Medical Center, Tumaga, Zamboanga City.

Two caliber .45 were confiscated from the suspects with two magazines and 13 pieces of live ammunition and one piece sachet of white crystalline substance suspected as shabu during the operation Wednesday, October 16, police said.

“Patrolman Adamer Pandangan, buddy of the late Patrolman Umpad positively identified the suspects. They were recognized from the CCTV footage and based on the citation ticket issued to the suspects,” Zamboanga police said.

They will be charged with murder, violation of Republic Act No. 10591 for illegal possession of firearms and ammunition, and violation of RA 9165 or the Comprehensive Dangerous Drugs Act of 2002.

Umpad was killed by riding-in-tandem suspects Sunday dawn, October 13, when he was stepping out of the patrol car to issue citation tickets to drag racers along Mayor Vitaliano Agan Avenue.