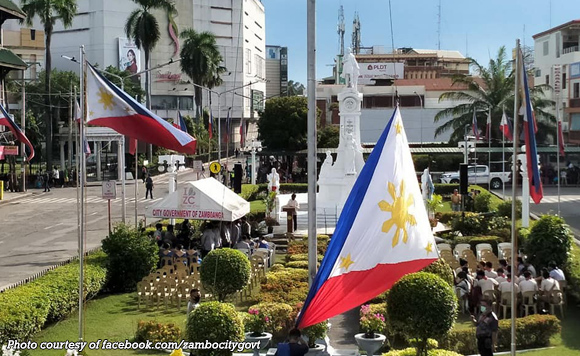 The Zamboanga City government, in collaboration with the Order of the Knights of Rizal- Zamboanga Chapter, led the commemoration of 161st birth anniversary of national hero, Dr. Jose Rizal, on Sunday, June 19.

Councilor and Vice Mayor-elect Josephine Pareja, together with the Order of the Knights of Rizal Western Mindanao Area Commander Domingo Falcasantos, graced the celebration that kicked off with the flag-raising ceremony followed by the wreath-laying rites at the Rizal Monument fronting the City Hall.

Pareja, in a message, rallied the residents to emulate Rizal’s cause “as we strive to be a better people and as we fight our battles against the pandemic, against corruption, and against crime.”

Rizal, she said did not fight battles in the field as “his sword was his pen, his weapon was his intelligence and his force was his heart.”

The national hero advocated for “change without violence, betterment that is inclusive to all and excellence in all we do, ” she stressed.

“In his works, his books and the movement which he inspired, causing the revolution, are the legacies that remain today, and today, we remember,” Pareja added.

Present during the commemorative program were city officials, representatives from national government agencies, non-government organizations, academe, police, and military units among others.