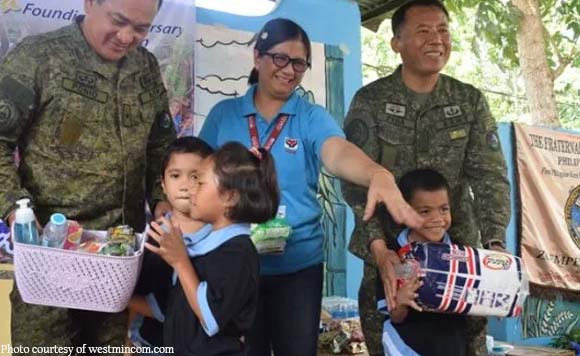 0 165
Share
Want more POLITIKO News? Get the latest newsfeed here. We publish dozens and dozens of politics-only news stories every hour. Click here to get to know more about your politiko - from trivial to crucial. it's our commitment to tell their stories. We follow your favorite POLITIKO like they are rockstars. If you are the politiko, always remember, your side is always our story. Read more. Find out more. Get the latest news here before it spreads on social media. Follow and bookmark this link. https://goo.gl/SvY8Kr

Officials of the Western Mindanao Command (Westmincom) have distributed gifts to some orphan children in Zamboanga City.

“This is one way of giving back and helping the less privileged without expecting something in return. We are glad to help children in whatever means we can,” he said.

“We want to reach out to the less privileged and make a difference in our lives as public servants and soldiers. We also want to enliven the hopes of less fortunate children so they will strive for a better future,” said Westmincom Commander Lt. Gen. Cirilito Sobejana.