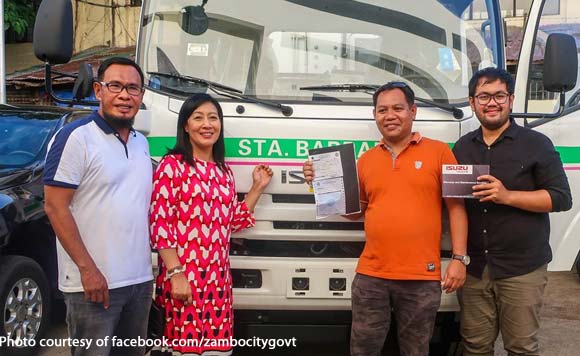 The Zamboanga City government has turned over 20 garbage trucks to 20 barangays Thursday, November 28.

It was conducted barely three days after the first batch of 20 similar equipment were also distributed to the barangays.

“Empesa kita el limpiesa na Ciudad,” Climaco said the as she urged barangay officials to make proper and good use of the Isuzu garbage trucks in pursuit of the city’s priority thrust on cleanliness and sanitation.

She assured that the garbage trucks are quality and branded trucks, citing certifications from concerned agencies including the Consulate of Shanghai, where the supplier of the trucks is based.

The mayor urged the barangay chairmen to do their level best in maintaining a clean environment to ensure a better future for the children of Zamboanga.

The city government also earmarked a P250,000 funding for each barangay in the city and part of the amount will be used to spend for the maintenance and fuel expenses for the garbage trucks.