Westmincom to tap fishing firms in guarding against poachers 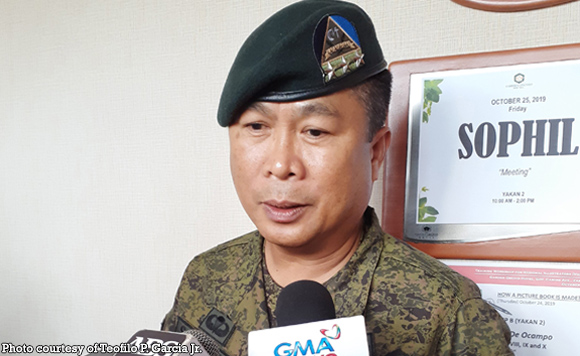 0 171
Share
Want more POLITIKO News? Get the latest newsfeed here. We publish dozens and dozens of politics-only news stories every hour. Click here to get to know more about your politiko - from trivial to crucial. it's our commitment to tell their stories. We follow your favorite POLITIKO like they are rockstars. If you are the politiko, always remember, your side is always our story. Read more. Find out more. Get the latest news here before it spreads on social media. Follow and bookmark this link. https://goo.gl/SvY8Kr

ZAMBOANGA CITY — The Western Mindanao Command (Westmincom) is eyeing to tap all the local fishing firms to help secure the vast maritime domain here in Mindanao against intrusions by terrorists and pirates.

Sobejana said the enlistment of fishing fleets will augment the limited floating assets of the Philippine Navy (PN) and the Philippine Coast Guard (PCG).

“The intention is to make this region very peaceful and progressive one,” Sobejana said citing the maritime potentials have not been tapped to the maximum brought about by the security issues.

Sobejana said some of the local fishing companies have already activated their own Special Civilian Armed Forces Geographical Unit Active Auxiliary (SCAA) and are affiliated as Naval reservists.

“There will be a huge expansion in our security coverage if all local fishing companies will be affiliated as a reserve unit of the Navy,” he said.

“They (fishing firms) will be our force multiplier,” he added.

Jaydrick Johnson Ya, Southern Philippines Deep Sea Fishing Association president, said their 30 members representing some 800 fishing vessels are ready to serve as force multipliers to help secure the maritime area within the jurisdiction of Westmincom.

He noted that some of their workers are already enlisted as Navy and Army reservists.

Arturo Duterte is the youngest Presidential jetsetter at 2-months old