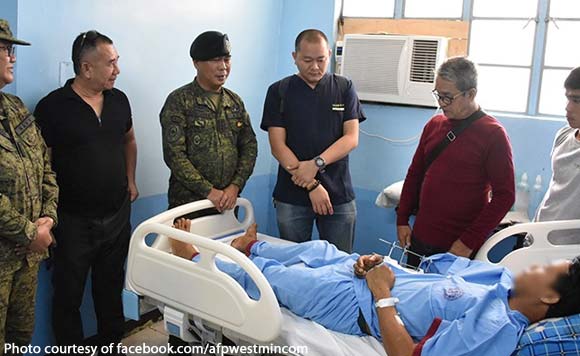 0 185
Share
Want more POLITIKO News? Get the latest newsfeed here. We publish dozens and dozens of politics-only news stories every hour. Click here to get to know more about your politiko - from trivial to crucial. it's our commitment to tell their stories. We follow your favorite POLITIKO like they are rockstars. If you are the politiko, always remember, your side is always our story. Read more. Find out more. Get the latest news here before it spreads on social media. Follow and bookmark this link. https://goo.gl/SvY8Kr

An injured Vietnamese fisherman has expressed gratitude for the assistance accorded to him by the Philippine Coast Guard (PCG) despite entering fishing illegally in Philippine waters on New Year’s Eve.

Dang Canh, who is currently recuperating at the Camp Navarro General Hospital here, broke his right arm and leg while operating a trawling machine aboard a fishing vessel off the Turtle Islands municipality, Tawi-Tawi.

PCG personnel stationed in Turtle Islands boarded the vessel after they monitored the fishing boat vessel anchored in the area on December 31 last year.

Also aboard the fishing vessel were Nguyen Van Jhanh, the boat captain, and Nguyen Tanh Joan, aside from Canh.

Canh was immediately taken to the Turtle Islands Regional Health Unit before being airlifted to Camp Navarro General Hospital for further treatment.

“We are very much thankful for the assistance provided by the Armed Forces to us. Despite our illegal entry into the Philippine waters, they still rescued us,” Canh said.

Canh expressed his gratitude to Lt. Gen. Cirilito Sobejana, Western Mindanao Command (Westmincom) chief, who visited him in the hospital on Monday.

“No words can describe how grateful I am for the best assistance the military personnel provided through their hospitality and sincere services,” Canh added.

Sobejana said Canh will be turned over to the proper authority after his treatment.

“I commend our troops and the PCG for this laudable act of humanity,” he said.

Meanwhile, the boat captain and the fishing vessel are in PCG’s custody in Turtle Islands for further investigation. (PNA)