Was Trillanes spotted wearing a DU30 shirt? Find out here 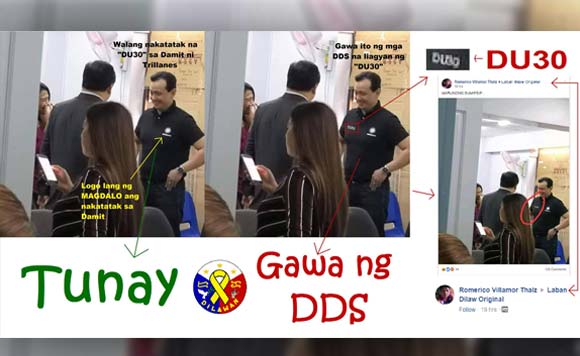 Did opposition Senator Antonio Trillanes IV really wear a DU30 shirt during his visit in Davao?

Did the opposition senator had a change of heart upon landing in Davao? Apparently, not. On Facebook, Liberal Party fan page “Ipagtanggol ang Dilawan” clarified that some Duterte supporters are claiming that the Senator wore a DU30 embroidered polo during his visit to Davao. The post, which shows Sen. Trillanes clad in a black polo explained that the photo was just photoshopped, and that the senator was in fact wearing a Magdalo shirt.

Sen. Trillanes came to Davao City to post bail for each case and eventually pleaded not guilty to the four libel counts filed against him by Paolo Duterte and Presidential son-in-law Manases Carpio.

Isabelle Duterte goes on a food bonding with pals