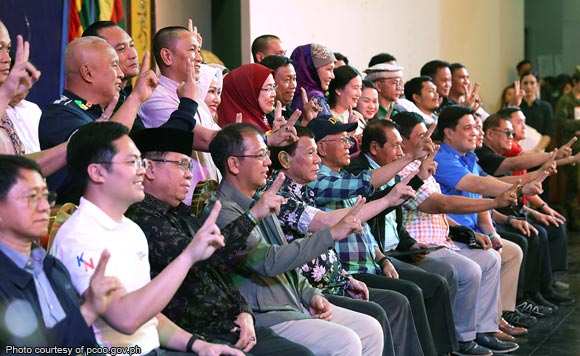 President Rodrigo Duterte has assured Moros that the national government will barely meddle in their affairs if the Bangsamoro Organic Law (BOL) is approved in a plebiscite.

Duterte urged Mindanaoans to vote “yes” to the BOL ahead of the plebiscite to be held on Jan. 21.

“Me, I guarantee you that there will be the least disturbance or interference kung meron na diyang workable governance ninyo,” he said in a peace assembly held in Cotabato City Friday (January 18).

Duterte said Moros can divide land and resources in the Bangsamoro region as they deem fit.

“Walang iistorbo sa ‘yo at wala naman talaga. The legendary Liguasan Marsh, they say it will provide so many things in life. O ‘di inyo,” he said.

The BOL will pave the way for the creation of a new political entity that will enjoy greater autonomy than the existing Autonomous Region in Muslim Mindanao (ARMM).

An estimated 2.8 million voters are expected to participate in the plebiscite, which will happen on January 21 in the ARMM, Isabela City and Cotabato City.

A similar plebiscite will be held on February 6 in Lanao del Norte except Iligan City, North Cotabato and other local government units with approved petitions to join the referendum.