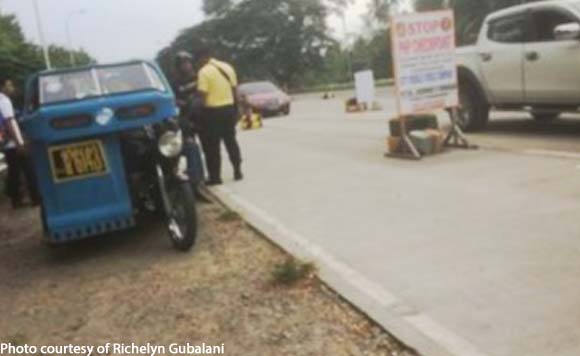 0 413
Share
Want more POLITIKO News? Get the latest newsfeed here. We publish dozens and dozens of politics-only news stories every hour. Click here to get to know more about your politiko - from trivial to crucial. it's our commitment to tell their stories. We follow your favorite POLITIKO like they are rockstars. If you are the politiko, always remember, your side is always our story. Read more. Find out more. Get the latest news here before it spreads on social media. Follow and bookmark this link. https://goo.gl/SvY8Kr

GENERAL SANTOS CITY — The city government has implemented a “total lockdown” against “colorum” or unregistered tricycles, which come from neighboring localities, in a bid to address the worsening traffic problem on major roads.

Willie Ramos, assistant chief of the City Traffic Management Office (CTMO), said Wednesday the move is in line with their efforts to reduce the number of unregistered tricycles plying the city’s streets.

Ramos said they have set up checkpoints in the city’s four main entry and exit points to prevent the entry of tricycles coming from nearby municipalities.

In particular, he cited the tricycle operators from Polomolok town in South Cotabato; and Alabel, Maasim, and Malungon in Sarangani.

“Only tricycles registered in the city are allowed to operate and ply our streets,” Ramos told reporters.

He said the “lockdown” is part of the city government’s “Oplan Ligtas, Linis Kalsada” that was formally launched on Tuesday.

Ramos said the checkpoints established in the city’s highway boundaries in barangays Buayan, Bawing, Tingacan, and Apopong will be regularly manned by enforcers.

The city government estimated that about 30 percent of tricycles operating in the city come from the neighboring localities.

The City Council’s committee on transportation estimated 42,000 tricycles plying various routes within the city’s 26 barangays. Some 30,000 of these are “trisikads”, or scooters with sidecars, and the remaining 12,000 are standard six-seater tricycles.

A World Bank-funded study conducted in 2014 by the League of Cities of the Philippines cited that the ideal number of tricycles in the city should only be 9,000 units.

City Administrator Arnel Zapatos said there are enough registered tricycles and public utility vehicles that can cater to the transportation needs of residents.

Zapatos assured that the local government would sustain the campaign as mandated by the city’s transport and traffic code. (PNA)