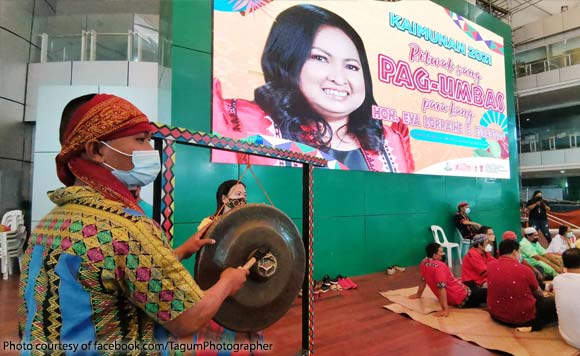 On Sunday, October 10, the vice mayor was given the title “Bia Digabunan” in a Pag-Umbas ritual.

According to Indigenous People Mandatory Representative (IPMR) Bia Jessica Pandacan-Ado, Digabuan is a respected and dignified leader who has an unwavering love and care for others.

She said this will best describe the character of Estabillo.

The local government said Estabillo has been a long time ally of the cultural communities in protecting and advancing their rights and welfare. Proof to this is the passage of City Ordinance No. 858 which is also known as the Indigenous Cultural Communities Welfare Program (ICCWP) that she authored together with the late City IPMR Datu Damiano Cipro in 2019.

This landmark legislation comprehensively institutionalized various programs that benefitted the members of the Indigenous and Islamized Ethno-linguistic tribes in Tagum.

Among its salient programs include the provision of educational assistance, pre-employment assistance, burial and funeral assistance, medical/laboratory/hospital bill assistance, preservation of culture and tradition, support to Tahderriyah and community-based Madrasah programs, the establishment of the Tribal and Muslim Community Public Cemetery, and many more.

The Pag-umbas ritual was part of the Kaimunan Festival this October as the Indigenous Peoples’ way of thanking and giving back to Estabillo in her numerous contributions to the cultural communities in Tagum.