Uy questions COMELEC over his non-proclamation as congressman-elect yet 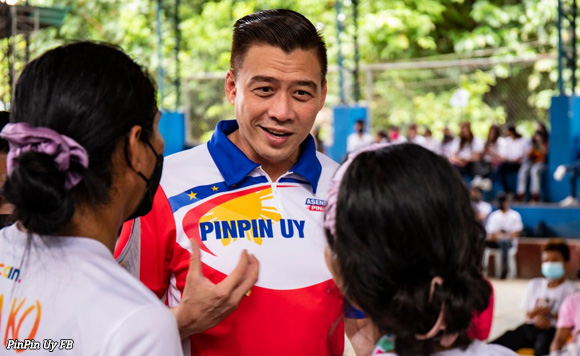 Presumptive congressman-elect Roberto ‘Pinpin’ Uy, Jr. and his legal team are seeking answers from the Commission on Elections (COMELEC) over its decision to suspend his proclamation as the winner of the 2022 congressional race for the first district of Zamboanga del Norte.

It has come to the attention of Uy that provincial election supervisor Atty. Verly Tabangcura-Adanza, chair of the Provincial Board of Canvassers (PBOC), delayed his proclamation citing an alleged order coming from COMELEC chairman Saidamen Pangarungan around 10:00 PM last night (May 11).

As of 10 AM Thursday, partial and unofficial results aggregated from 332 or 96.37 percent of election returns processed showed that Uy is leading as congressman-elect for the first district of Zamboanga del Norte after garnering 69,591 votes.

Atty. James Verduguez, chief legal counsel for Uy, said he is convinced there are no grounds for the COMELEC Provincial Board of Canvassers to delay the proclamation of his client any further since a certificate of canvass and proclamation have already been signed by its members, including Adanza.

Verduguez is working with Atty. Dino de Leon—legal counsel for the Partido Demokratiko Pilipino-Lakas ng Bayan (PDP-Laban) of which Uy is a member of—to uphold the integrity of the local elections in Zamboanga del Norte by protecting the votes received by the presumptive congressman-elect.

Uy’s legal counsels argue that there is no valid order duly certified by the Clerk of the Commission and the Electoral Contests Adjudication Department of the COMELEC for the PBOC to hold off the proclamation of winning candidates.

According to Verduguez, the “phone call” that Adanza said she received from Pangarungan could not be relied upon unless it was also delivered in writing as a matter of protocol; otherwise, this could be interpreted that she was being induced by the COMELEC chair not to perform her duty under the law.

“The duty of the PBOC is ministerial; therefore, provincial election supervisor and PBOC Chair Adanza has no discretion whatsoever to suspend or hold off Uy’s proclamation based on a ‘mere’ allegation of a phone call from the COMELEC chair,” Uy’s legal counsel said.

“Moreover, there is no valid order, duly certified by the Clerk of the Commission giving such directive. It must be emphasized that the COMELEC is a collegial body composed of seven (7) members,” Verdugez added.

The first congressional district of Zamboanga del Norte covers the northernmost part of the province including Dapitan City and nearby municipalities of La Libertad, Mutia, Piñan, Polanco, Rizal, Sergio Osmeña, Sr. and Sibutad.

Election returns have already been transmitted and processed 100 percent in those locations and showed that Uy was elected as district representative in six areas except in Dapitan City and Sergio Osmeña, Sr. where he was edged by his closest rival incumbent Rep. Romeo Jalosjos, Jr.