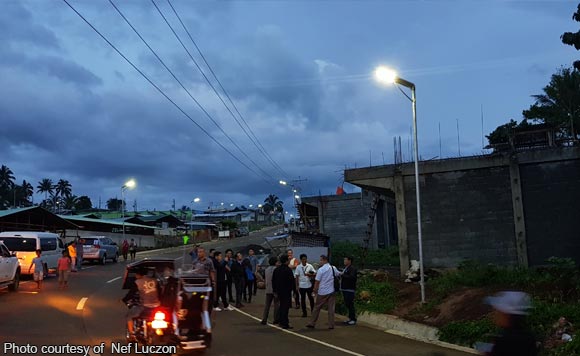 The project includes those completed on September for Sarimanok Evacuation Sites 1 and 2 and on October in Sagonsongan temporary relocation site, said MinDA Secretary Abul Khayr Alonto.

Alonto said the electrification project is part of the PHP11.7 billion “Building Low Emissions Alternatives to Develop Economics Resilience and Sustainability” or B-LEADERS, which is funded by the USAID.

He said the B-LEADERS solar electrification project is implemented all over the Philippines until 2030 and is mainly focused on armed conflict areas.

For this city, the project has already installed 205 solar street lights along the main road of Bahay Ng Pagbabago Temporary Relocation Site in Barangay Sagonsongan, where around 1,200 temporary houses are
occupied by displaced families.

A total of 27 solar lamp posts have also been installed at two sites of Sarimanok area in Barangay Poblacion where around 200 tents are being occupied by displaced families who are still waiting to be
transferred to more comfortable temporary housing units. 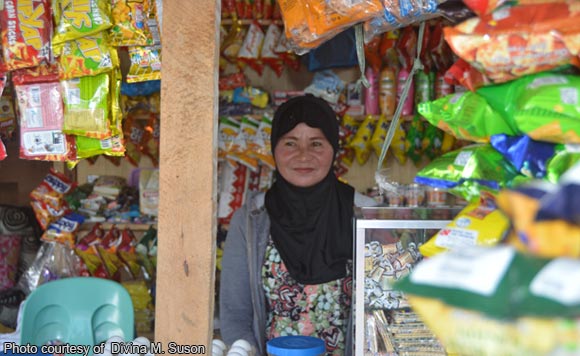 Naifah Macabada, a displaced resident from barangay Tolali, is glad of the installation of street lights in the main street of the temporary relocation site in Barangay Sagonsongan saying since the installation of the solar lamp post, she has extended the opening of his sari-sari store from 7:00pm to 9:00 pm.

Naifah Macabada, a resident from Barangay Tolali, said the street lights in her tent in Sagonsongan have helped her extend the family store’s business hours.

(I used to close my store at 6 p.m. because it was already dark. I still have trauma from fleeing during the war. But now that we have the street lights, my store is open until 9 p.m. because many are still coming to buy).

Meanwhile, Task Force Bangon Marawi (TFBM) field manager and Housing Assistant Secretary Felix Castro said families currently staying in the evacuation centers outside Marawi City will be given priority for the next batch of temporary shelters.

“We still have displaced families in tents. If all of them will be given temporary houses, then those coming from the MAA (most affected area) who are home-based will be our next priority–if there are still
available units,” Castro said.

Jasliya Abbas, a mother of six from Barangay Moncado Colony, is still living in a tent in Sarimanok Site 2.

Abbas said it was still a struggle on their part to go to the common toilet, especially at night, as it is located far away from their tent.

(It was scary especially to our female children who want to go to the CR during the night. There were people we didn’t know roaming around our tents. Now that we have these lamp posts, we have time until 11 p.m. to spend outside talking to our friends and neighbors).

Divina Chingcuanco, chief of party of B-LEADERS Project, said the solar roof panelboard installed in each health center can produce 1.5 kilowatts per day while each solar lamp post can produce 30 watts of
electricity.

“This is not the last. We will continue lighting the whole community,” hingcuanco said. (PNA) 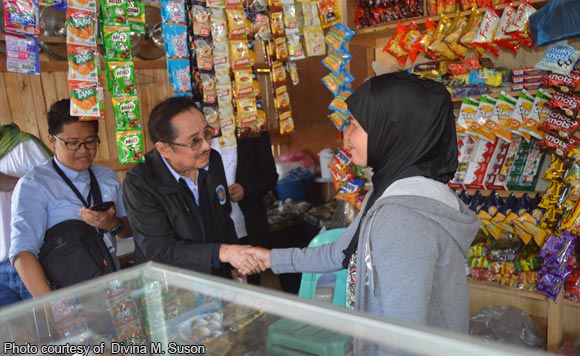 Mindanao Development Authority Secretary Abul Khayr Alonto visits the store of Naifah Macabada, a displaced resident from Barangay Tolali who is now having her small sari-sari store inside the temporary relocation site in Barangay Sagonsongan, Marawi City. Alonto visits Marawi City, November 14, during the site visit of the newly installed solar-powered lamp posts as part of the 11 billion pesos electrification project of the United States Agency International Development (USAID) all over the Philippines.