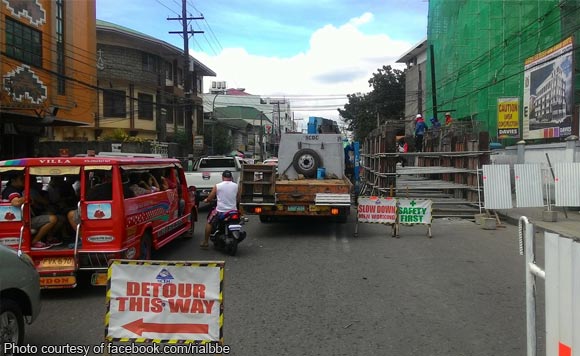 Motorists passing Jalandoni Street in Iloilo City may have to brace for more traffic jams, no thanks to major drainage works there.

The Department of Public Works and Highways Region 6 appealed for understanding for the detention tank project that started last March 28.

Worse, the DPWH officials admitted carelessness in the construction could damage fiber optic lines and water pipes in the area.

A portion of Jalandoni Street had been closed to traffic for more than a month now to give way to the on-site pre-casting of concrete tanks.

But the DPWH said the detention tank is its solution to the flooding in Iloilo City. The tank measures 1,122 meters long, and can hold 7,012.5 cubic meters of water.

The works are part of the DPWH’s P100-million comprehensive drainage project, which will run between Iloilo River covering Jalandoni and Gen. Luna Streets to the Iloilo Strait at Barangay Rizal in the city proper.

Revived Panay railway system could be ‘Made in China’

Gigibain na: 600 ‘illegal’ Iloilo City homes may be destroyed due to road expansion