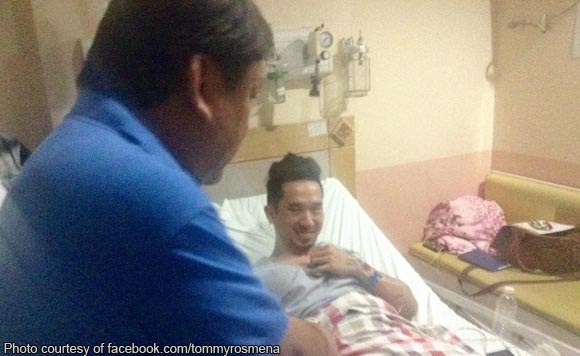 Here’s some energy to burn for the long battle ahead.

Mayor Tomas “Tommy” Osmeña again paid a visit to Ephraim Nuñal, the male nurse who was shot during a traffic altercation in Cebu City that involved David Lim, Jr., the nephew of businessman and alleged drug lord Peter Lim.

Osmeña wanted to lift Nuñal’s spirits as he recovers from surgery, so he brought him a serving of sinigang which he cooked at home. He also wanted to reassure the victim that he will be taking care of all “medical and legal expenses,” and that he will fight with him during the long way ahead.

The politiko also warned Nuñal that things could get ugly, but assured that he has tasked his long-time security aide Adonis Dumpit to stand guard for the meantime.

“If Ephraim chooses to fight, he will have to stick his neck out. I told him that if he does, I will stick my neck out right there with him,” Osmeña said.

Dynasty at work: Sharon Garin proud to come from a family of politicians