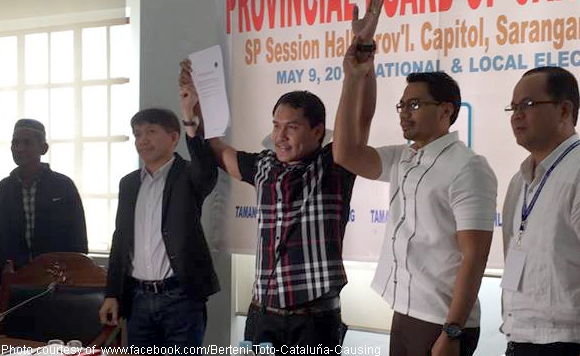 0 360
Share
Want more POLITIKO News? Get the latest newsfeed here. We publish dozens and dozens of politics-only news stories every hour. Click here to get to know more about your politiko - from trivial to crucial. it's our commitment to tell their stories. We follow your favorite POLITIKO like they are rockstars. If you are the politiko, always remember, your side is always our story. Read more. Find out more. Get the latest news here before it spreads on social media. Follow and bookmark this link. https://goo.gl/SvY8Kr

Politikos who ran under the banner of incoming senator Manny Pacquiao won big in Sarangani province.

Heading the list of winners from the People’s Champ Movement (PCM) is the retired boxing superstar’s brother, Rogelio Pacquiao, who will succeed the eight-division champ as Sarangani lone district representative.

Rogelio was proclaimed winner Sunday (May 15) by the Provincial Board of Canvassers (PBOC) with 142,307 votes, a PNA report said. His closest rival, independent bet Elson Formoso, only received 13,938 votes.

The elder Pacquiao served two terms are Sarangani congressman before aiming for the higher position.

Also winning via landslide in the polls was incumbent Governor Steve Chiongbian Solon.

Solon amassed 139,446 votes while the second-placed Mohamad Aquia of the Liberal Party (LP) only received the nod of 27,554 voters.

All winning board members were PCM stalwarts.