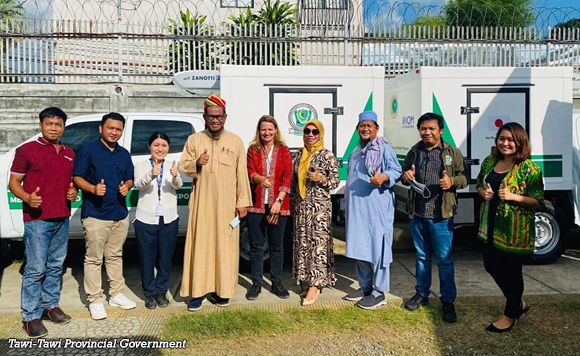 The Tawi-Tawi provincial government has expressed its gratitude to the Japanese government and the United Nations International Organization on Migration (UN-IOM) for providing medical cold chain vehicle to the province.

Tawi-Tawi is one of the three provinces in the Bangsamoro Autonomous Region in Muslim Mindanao (BARMM) that received the vehicle to strengthen the Covid-19 response and prevention. Basilan and Sulu are the other recipients.

On behalf of Governor Yshmael “Mang” I. Sali, she thanked the IOM, Embassy of Japan, and Japanese Ambassador to the Philippines Kozuhiko Koshikawa for their kindness and for including Tawi-Tawi in their priority projects as the cold chain vehicle will help increase the vaccination coverage in the province.

IPHO Tawi-Tawi Head Dr. Sangkula Laja said the donation will be used not only for the fight against Covid-19 but also in transporting specimens, medicines, and other vaccines for long-term health interventions like polio and measles.