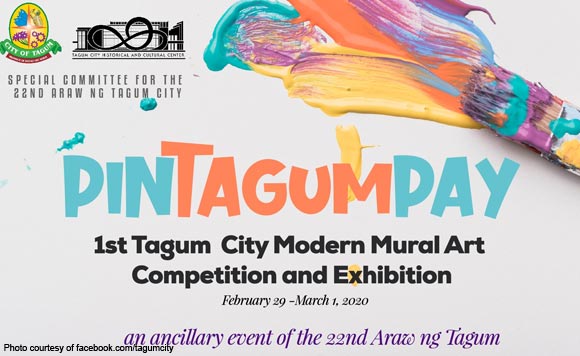 0 124
Share
Want more POLITIKO News? Get the latest newsfeed here. We publish dozens and dozens of politics-only news stories every hour. Click here to get to know more about your politiko - from trivial to crucial. it's our commitment to tell their stories. We follow your favorite POLITIKO like they are rockstars. If you are the politiko, always remember, your side is always our story. Read more. Find out more. Get the latest news here before it spreads on social media. Follow and bookmark this link. https://goo.gl/SvY8Kr

The city government of Tagum is inviting artists from the city and Davao region to participate in an art competition and exhibition.

Through the City Historical, Cultural and Arts Council, the local government said it is organizing the Pintagumpay Modern Mural Art Competition and Exhibition on February 29-March 1, 2020 to highlight the various victories or Tagumpay of Tagum 22 years since its founding as a component city.

“To be participated by Tagumenyo and Davao Region-based artists, the Pintagumpay Modern Mural Art Exhibition and Competition is an avenue for artists to convey to the public their artistic renditions about Tagum: from its culture, landscapes, seascapes, traditions, icons, history, and their vision for the future of Tagum as enshrined in the City Government of Tagum’s Tagumpay Vision 2025,” it said.