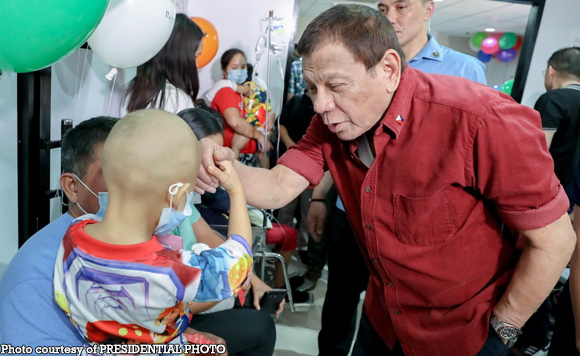 “He seemed to be bracing himself and mustering for strength and courage. But when a child took his hand in the traditional Filipino “mano po”. And just like that, he was transformed to a superhero like IronMan, Superman, Kapitan Kidlat,” Dr. Mae Dolendo, House of Hope program director, said in a Facebook post on Saturday.

Dolendo said the President was cheerfully talking to each kid like he has all the time in the world, giving kisses and joking with cancer patients.

In an interview on Sunday, Senator Christopher Lawrence Go said Duterte allots his time every year to celebrate Christmas with the cancer-afflicted kids.

“These kids are close to his heart. He really loves the children. He will really find time to visit and be with them,” Go said.

He also said that the President was happy upon knowing that a cancer patient he took care for about 10 years was now a survivor and have his own family.

In February this year, Duterte donated his house in Margarita Village along J.P. Laurel Avenue here to the cancer-stricken kids. The property was transferred to House of Hope in January based on a deed of donation signed by the President.

Before giving the house, Duterte already allowed the use of his three-bedroom house in the said address for the past years to the House of Hope patients.