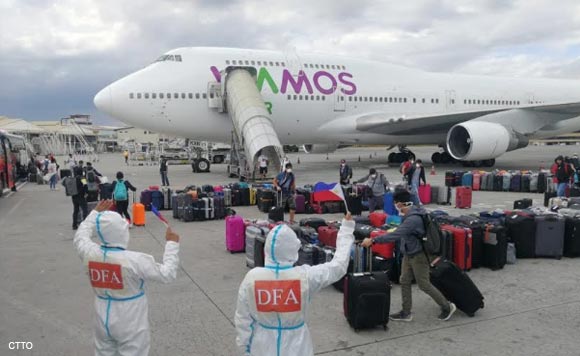 BUTUAN City- Caraganon or native or resident from Caraga region, Lovely not her real name is a returning OFW from Middle East.

Lovely was forced to go home, no choice after in the Middle Eastern country where she comes from, working as OFW, was also in a lockdown due COVID19, can’t work there anymore, can’t go anywhere and can’t stay any longer.

She has one airline trip to go as she is on her way home here in Butuan City but can’t go home even if entire Caraga region now in modified community quarantine except some 50 barangays in Butuan City who remained by the insistent of the Mayor, in the Enhanced Community Quarantine or ECQ mood.

The Mayor may have some reasons because as of May 1 official DOH-Caraga updated report, Butuan City has the most number of COVID19 suspected with 24 with already three confirmed COVID19 positive.

Worst Lovely can’t buy ticket home even she has options via land trip, air transport trip and sea trip due lockdown in all means of transportation.

Since April 1, Caraga region disallowed entry in its borders and if Caraganons will go to Cagayan de Oro City in Misamis Oriental, they will be allowed to pass the border but can’t go back to Caraga region unless the strict lockdown order is lifted by the Caraga Regional IATF.

And so Lovely on her third week already now at the OWWA provided safe house in National Capital Region, forced to bite the bullet, again with the reality she claimed she no longer has money to buy her personal necessities, sad part she can’t go home and where else to go?

According to World Bank report, remittances to low and middle income countries will drop by a fifth this year to $445 billion.

The drop of OFWs remittances this year due COVID19 is the worst slide in decades and a sharp turnaround from last year’s increase to a record $554 billion, which exceeded foreign direct investment in these destinations.

The lender forecasts a slide of 22% in South Asia, where funds are largely bound for India and Pakistan.

The Philippines, which gets 10% of its gross domestic product from such payments, could see a decline of 13%.

Waiting for paychecks from mothers like Lovely, an OFW from Butuan City, fathers, uncles and aunts abroad is an existential concern for those left at home.

The faltering flow of cash is likely to mean less money is available for basic needs, especially medical care.

In the country like the Philippines where an entire ecosystem is supported by people overseas, be they domestic workers, nannies and caregivers in Singapore and Hong Kong, energy and construction workers in the Persian Gulf, or seafarers around the world.

Filipinos make up about a quarter of merchant-marine staff.

More than 10 million Filipinos , or about 9% of the total Philippine population, are employed abroad at any given time.

Unseen COVID19 pandemic is producing a triple-whammy for migrants:

They can’t work, they can’t go home (with airlines grounded) and they stand a greater risk of infection by staying put in their densely packed urban quarters. (bs/tpg)