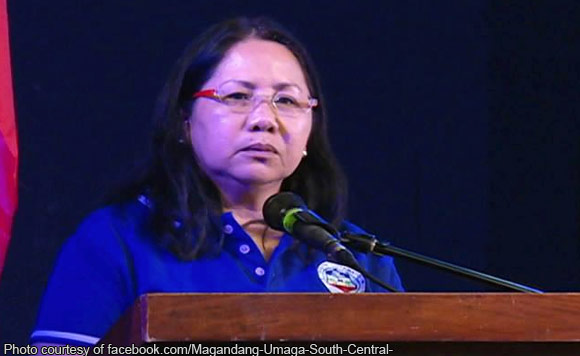 South Cotabato Governor Daisy Avance-Fuentes on Wednesday, April 18, said they have partnered with the Diocese of Marbel for the implementation of a moral recovery program for surfacing drug personalities in the province.

The lady politiko the partnership, inked with Bishop Dinualdo Gutierrez, calls for the “spiritual transformation” activities in support of the continuing interventions for the province’s Surfacing Personalities Involved on Drugs (SPIDs).

She said the preparations are currently ongoing for the full implementation of the initiative, which is dubbed “Pastoral Accompaniment of Illegal Drugs Users and Pushers” or PAID-UP.

“The program aims to transform illegal (drug) users and pushers into responsible, responsive and disciplined citizens of the country who commit to the promotion of the common good especially the poor people,” Fuentes stressed.

The South Cotabato governor said the program’s implementation will be facilitated by the diocese, in coordination with the local government’s technical working group on SPIDs and other concerned stakeholders.

Gutierrez said the program mainly focuses on the SPA strategy, which stands for Study, Pray and Act.

The bishop said the “study” component will revolve around learnings on catechism, biblical and papal teachings, and other related topics.

The “pray” part will focus on liturgical celebrations and devotions and the “Act on 10 Commandments,” while the “act” component will deal with adherence to the 10 Commandments, spiritual and corporal works of mercy, Philippine Constitution, Civil Code and other laws and regulations, he said.

The clergyman explained that as entry point to the program, the prospective participants will initially undergo “personal renewal experience.”