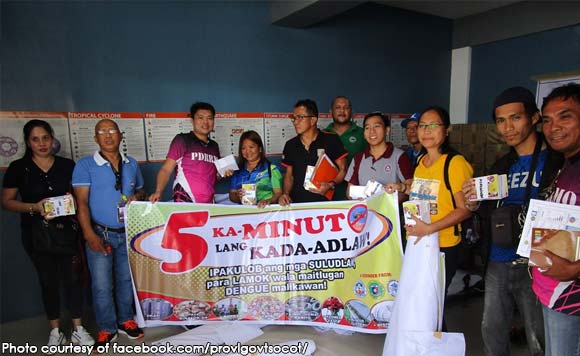 The provincial government of South Cotabato has earmarked P1.5 million to address the dengue outbreak.

Provincial Disaster Risk Reduction and Management Office (PDRRMO) said that under the cash for work (CFW) program, the 10 municipalities and lone city of the province would receive P100,000 each for the “search and destroy” operations of the mosquito-breeding sites in their respective locality.

It said that each CFW beneficiary is allowed P250 for a day’s work, which include “operation kulob”, clean up drive in sitios, puroks and barangay, and honorarium to fogging/misting sprayman.

The provincial government also distributed tarpaulin streamers and stickers to the City and Municipal DRRMC members to be used for information campaign, it said.

Each barangay health station was provided with one streamer and 400 stickers for posting in vehicles, particularly tricycles and jeepneys.