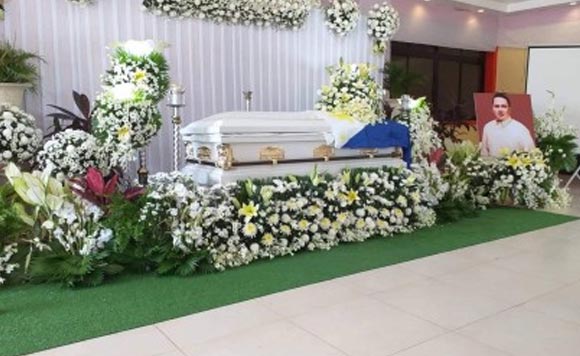 0 272
Share
Want more POLITIKO News? Get the latest newsfeed here. We publish dozens and dozens of politics-only news stories every hour. Click here to get to know more about your politiko - from trivial to crucial. it's our commitment to tell their stories. We follow your favorite POLITIKO like they are rockstars. If you are the politiko, always remember, your side is always our story. Read more. Find out more. Get the latest news here before it spreads on social media. Follow and bookmark this link. https://goo.gl/SvY8Kr

The remains of Clarin town Mayor David Navarro is now laid at his residence in Barangay Lapasan here, while the vice mayor has immediately succeeded as the town’s top local executive.

Navarro’s white coffin, draped with the national flag, arrived at the Ozamiz City port past 6:30 a.m. Sunday, two days after the mayor was slain in Cebu City while being transported to the city prosecutor’s office for the inquest proceedings of the charges he is facing for mauling a masseur.

In a hall decorated with white fresh flowers, floors covered with a green mat, the remains were placed beside Navarro’s blown-up photograph.

The family asked for an exclusive time until 12 noon after which visitors started to arrive.

Bonifacio town mayor Samson Dumanjog, who is also the president of the League of Municipalities in the Philippines-Misamis Occidental chapter, was the first to visit the wake.

In an interview with the media, Dumanjog said the death of his fellow mayor is still very hard to accept.

He expressed hope that justice for the slain mayor will be served, as he called on concerned agencies to help in the investigation.

“At least mahatagan pud nato ang pamilya kay mao man pud ni ilang gikinahanglan. Ug kanang due process of law (At least the family can be given justice because that is what the family needs now, and due process of the law),” Dumanjog said the in interview.

The Navarro family has scheduled the burial on November 3 just beside their house.

On Monday, the municipal’s first councilor, Mel Davidson Navarro, will take his oath as the vice mayor.

Mel is David’s second child whose elder brother died in a suicide last year. Mel took the position vacated by his brother. In 2019 elections, Mel ran and won.

The younger Roa, who spoke to the media on behalf of the new mayor, said there are three priorities that the new administration will undertake on Monday.

Glorife will issue an executive order designating Emeterio as the new municipal administrator and an order that only wages and salaries shall be disbursed while the local government unit is still undergoing a transition period.

“Then our new mayor will meet the heads of office to start our work. While we mourn the passing of Mayor Navarro, we have to continue the operation in the municipal hall,” Emeterio said. (PNA)

Hataman: Time is ripe for another Muslim in SC