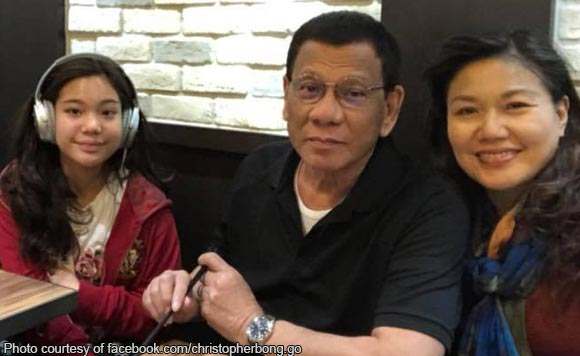 President Rodrigo Duterte flew to Hong Kong with his long time partner, Honeylet Avanceña, and youngest daughter Veronica or Kitty, after his former girlfriend announced she will run in the 2019 elections.

According to a report posted on the news website Mindanews, former TV personality Girlie Balaba will be running for councilor in Cagayan De Oro’s second district. She will run under Duterte’s party, PDP-Laban.

Balaba, a first time politiko, used to be based in Davao City but traces her roots in Cagayan De Oro.

According to Mindanews, Balaba and Duterte were in a relationship when he was mayor of Davao City. She was part of his entourage during the “listening tours” he conducted in 2015 in the run up to his presidential bid.

Special Assistant to the President Christopher “Bong” Go confirmed Duterte and his family were in Hong Kong Saturday (October 6) after photos of them surfaced in a blog. He said the President deserves to take a break.

Duterte will reportedly fly back to the Philippines Sunday (October 7).