Sara Duterte calls for vigilance following Jolo blasts: If we’re not careful, it could happen to us 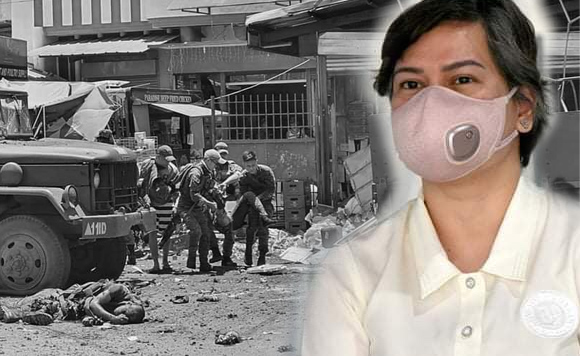 DAVAO CITY – Following Monday’s twin bombing incidents in Jolo, Sulu, Mayor Sara Z. Duterte has called on Dabawenyos to be vigilant and practice the “culture of security” at all times.

She said for years, the city has been boosting its security and anti-terrorism initiatives through the “culture of security” campaign to encourage Dabawenyos to adopt vigilance in their way of life.

The campaign, dubbed as “May Nakita? Dapat Magsalita!”, was rolled out by the city government and the Task Force Davao (TFD) last year.

“If we are not careful and if we do not show care for our city and our fellow Davawenyos, (the bombing) will happen to us,” Duterte said.

She also expressed her sympathies to the victims of the bombing and hoped the wounded will immediately recover.

“We sympathized with what you are going through and we would like to express our deepest condolences to the families of those who died– who were casualties of the bombing. We hope that the wounded would get well and feel better soon,” she said.

The mayor also hopes the recently-enacted Anti-Terrorism Law would address similar incidents and give justice to the victims.

“Likewise, we encourage all Dabawenyos to practice the four acts of culture of security: volunteer, report, remind, and participate,” the TF-Davao chief said in a statement Tuesday.

“While we do not have a direct terrorist threat in Davao City, we should never lower our guards against terrorists. We should always maintain our level of vigilance and focus even in the midst of the Covid-19 pandemic,” Yecla added. (PNA)

Paolo Duterte shows his followers how to ‘diet’