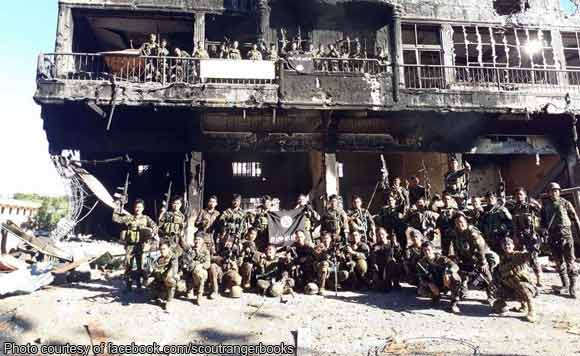 Terrorists leaders Isnilon Hapilon and Omar Maute, who have multimillion-peso bounty over their heads, were killed by military sharpshooters while trying to escape the building they have been holed up in Marawi City.

“Destroyer,” the commander of the 8th Scout Ranger Company which led the ground offensive which killed Hapilon and Maute, shared in a Facebook post written on the Scout Rangers Book page that he deployed a team of soldiers to surround the building in which the terrorist leaders were hiding as early as 7 p.m. Sunday (October 15).

The vicinity surrounding the building was also guarded by armored vehicles and soldiers who have night vision capabilities.

Aware that Hapilon and Maute might escape any moment in the dead of the night, the Scout Rangers stayed on alert for any movement on the ground.

At around 1:30 a.m. Monday (October 16), a soldier saw a person moving. He immediately shot the man, causing him to fall to the ground.

A little later, another person walked on the street. He was also shot down by a soldier inside an armored vehicle.

Destroyer said each person who attempted to come close to their dead targets were shot down.

It was only in the morning that the soldiers discovered they killed Hapilon and Maute, courtesy of the female hostages who identified them after they were rescued from the building.

The troops erupted in cheers, relieved they had killed the terrorist leaders responsible for the Marawi siege.

A P5-million bounty had been placed by Malacañang for the neutralization of Maute and his brothers, while P10 million was offered for Hapilon.

A separate $5 million bounty was also offered by the United States government for the arrest of Hapilon, a leader of the Abu Sayyaf group who was reportedly anointed as the leader of the international terror organization ISIS in Southeast Asia.