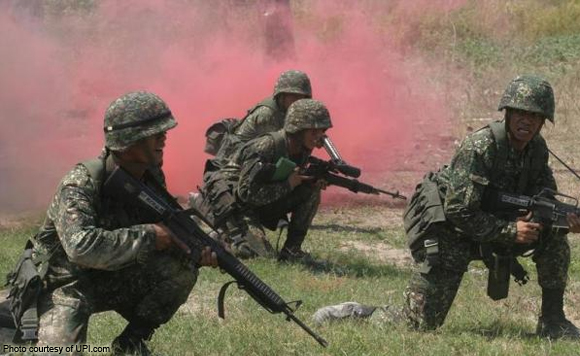 0 168
Share
Want more POLITIKO News? Get the latest newsfeed here. We publish dozens and dozens of politics-only news stories every hour. Click here to get to know more about your politiko - from trivial to crucial. it's our commitment to tell their stories. We follow your favorite POLITIKO like they are rockstars. If you are the politiko, always remember, your side is always our story. Read more. Find out more. Get the latest news here before it spreads on social media. Follow and bookmark this link. https://goo.gl/SvY8Kr

The clash took place 6:45 a.m. as patrolling operatives of the 11th Scout Ranger Company pounced upon the brigands thanks to tips from concerned residents.

In the brief firefight, two ASG members were killed with the military recovery the body of the slain bandit along with an M-16 automatic rifle fitted with a M-203 grenade launcher and one improvised explosive device (IED).

No losses were sustained by government forces in the encounter.

This brings to 38 the total number of ASG killed since the intensified combat operations was launched in July while scores were also wounded on the ASG.

Authorities believed the ASGs had splintered into small groups to evade soldiers and are planting IEDs to delay movements of government troops.

Sara Duterte will name her new baby ‘Stonefish.’ Here’s why