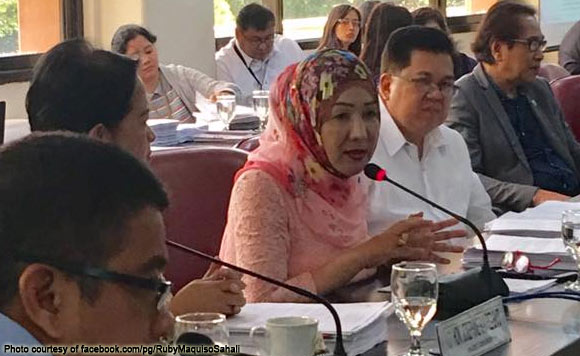 Tawi-Tawi Rep. Ruby Sahali said she expects that the most contentious point of debate on the Bangsamoro Basic Law will involve the “opt-in” provision for contiguous areas that may join the envisioned Bangsamoro territory.

“It’s difficult for me to be telling kung ano’ng provisions will be contentious issues. But, nevertheless, usually, like in 2014, the opt-in provisions, ‘yung areas, territorial areas na papasok sa bagong BBL, such as Zamboanga peninsula and areas adjacent to ARMM, and contiguous areas (will be the most contentious),” she said.

Sahali is the chairwoman of the House committee on peace, reconciliation and unity.

Under the BBL version filed by House leaders based on the draft submitted by the Bangsamoro Transition Commission, the Bangsamoro territory shall include the current area of the Autonomous Region in Muslim Mindanao and “all other contiguous areas where there is resolution of the local government unit or a petition of at least ten percent of the registered voters in the area asking for their inclusion at least two months prior to the conduct of the ratification of this Basic Law and the process of delimitation of the Bangsamoro.”

In 2014, the Aquino administration tried but failed to pass a BBL after the signing of a peace agreement with the Moro Islamic Liberation Front.

But passage of the BBL was derailed by the Mamasapano incident in January 2015 when 44 Special Action Force men were killed in a clash with Moro insurgents.

DSWD XI to send workers in Iligan for Marawi evacuees