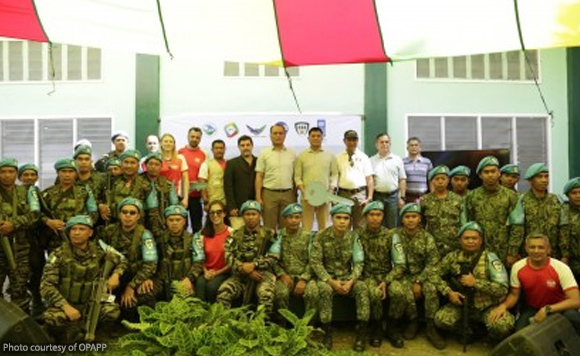 0 137
Share
Want more POLITIKO News? Get the latest newsfeed here. We publish dozens and dozens of politics-only news stories every hour. Click here to get to know more about your politiko - from trivial to crucial. it's our commitment to tell their stories. We follow your favorite POLITIKO like they are rockstars. If you are the politiko, always remember, your side is always our story. Read more. Find out more. Get the latest news here before it spreads on social media. Follow and bookmark this link. https://goo.gl/SvY8Kr

The barracks being constructed and with funding support from the OPAPP, in partnership with the United Nations Development Programme (UNDP) through its Support to Peacebuilding and Normalization (SPAN) Programme, could be found in seven provinces across Mindanao.

OPAPP Undersecretary David B. Diciano, head of the Joint Normalization Division and Chair of the GPH Peace Implementing Panel, and Enrico Gaveglia, UNDP deputy resident representative, led the turnover of the facility to the Joint Peace and Security Committee (JPSC) Wednesday, February 12.

The facility shall serve as the headquarters of the first JPST team which has been tasked to safeguard weapons turned over by members of the MILF-Bangsamoro who have undergone the process of decommissioning.

The decommissioned firearms are now kept in the Secured Arms and Storage Area (SASA) inside the camp under the oversight of the International Decommissioning Body (IDB). #