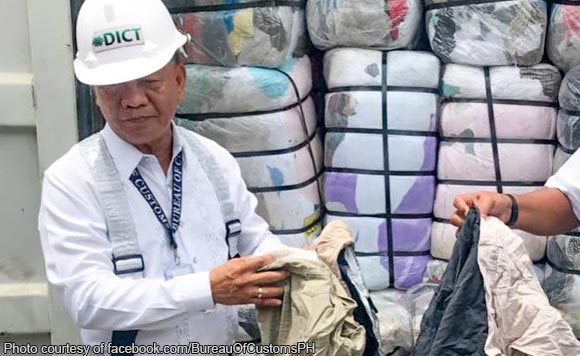 “Two of the shipments from China arrived in the city on separate dates, while the other two came from Indonesia and United States this month,” Lapeña said.

Lapeña said Port of Davao authorities intercepted the shipment of Janrev Enterprises, which is declared to contain plastic plates but was found to contain 401 cartons of Snowbear candy and 869 cartons of mosquito coil. Three imports of Bizreal Trading International were also found to contain apples mixed with 6,300 sacks of onion.

At the DICT, misdeclared shipments owned by Mahmud Enterprises and Kobesean Trading contained bales of “ukay-ukay” (used clothing), 275 boxes of magic sugar, and 115 boxes of lotion. Lapeña said the goods were declared as bedsheets, shoes, pillowcases, stuffed toys, and bags.

Lawyer Romalino Valdez, Port of Davao District collector, said they are closely monitoring the import of agricultural products to prevent their entry into the country.

Valdez said his office has issued warrants of seizure and detention to suspicious shipments. (PNA)