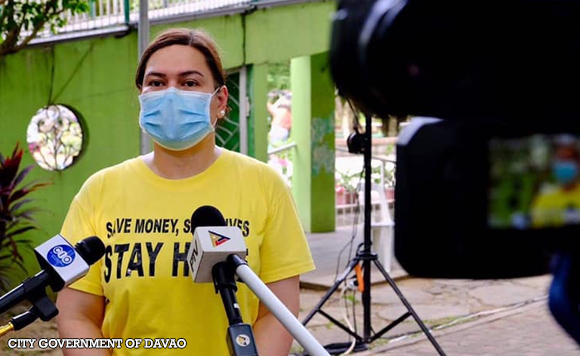 Davao City Mayor Sara Duterte-Carpio has welcomed a survey result showing that she topped the list of local officials outside the National Capital Region (NCR) insofar as achievement rating is concerned.

In a statement, the local chief executive said the 93 percent job approval rating that she received could be attributed also on the collective effort of all Dabawenyos in making the city a competitive and livable place.

“The honor I share with all of you who work hard to serve the Dabawenyos. We all genuinely love our city and this is our core strength. So, we must continue to make it livable,” she said.

The survey conducted by RP-Mission and Development Foundation Inc. (RPMDinc) showed that outside NCR, Duterte-Carpio got the first spot with a 93 percent approval rating, higher when compared to then-Mayor Rodrigo Duterte’s 86 percent back in 2010.

In the NCR, Quezon City Mayor Joy Belmonte ranked first as mayor with 87 percent achievement rating while Cebu Governor Gwendolyn Garcia obtained 77 percent that positioned her ahead of other regional governors.