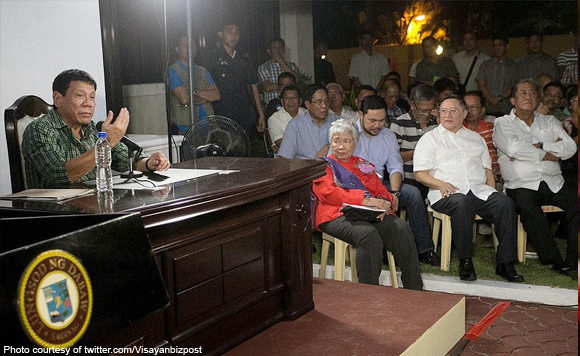 0 309
Share
Want more POLITIKO News? Get the latest newsfeed here. We publish dozens and dozens of politics-only news stories every hour. Click here to get to know more about your politiko - from trivial to crucial. it's our commitment to tell their stories. We follow your favorite POLITIKO like they are rockstars. If you are the politiko, always remember, your side is always our story. Read more. Find out more. Get the latest news here before it spreads on social media. Follow and bookmark this link. https://goo.gl/SvY8Kr

President-elect Rodrigo Duterte couldn’t care less about how the international community would react to his statements even if the whole world is now watching his every move and word as the Philippines’ top leader.

In a press conference in Davao City Thursday (June 2), Duterte was asked what he thought of the calls made by certain international groups to file a suit against him following his recent controversial remarks.

The President-elect said in response: “Bullshit to them.”

“They’re killing people. You cannot even lift a finger in Africa. They’re butchering the black people there,” he added.

Though he did not mention any foreign entity in particular, Duterte appeared to address them when he told them to shut up and stop imposing their standards on him.

“Tumahimik nga kayo. Do not force your code of conduct on me. You’re not supposed to do that. I never signed anything that said I have to behave in such a manner or in that manner,” he said.

Duterte leaves fate of captive Davao police chief in the hands of NPA’s ‘kangaroo court’: Give him 20 years hard labor

Migz to have oath before barangay chief in Bukidnon