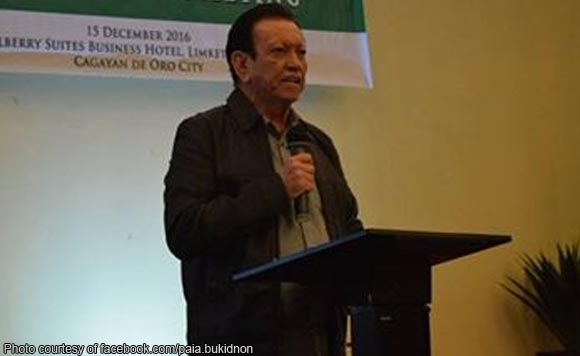 A Catholic priest and three other aspirants are challenging incumbent Bukidnon Gov. Jose Ma. R. Zubiri Jr. for the gubernatorial seat in the May 2019 elections.

Tabios filed his Certificate of Candidacy (COC) at around 11 a.m. at the Commission on Elections (Comelec) office in Malaybalay City on October 16. Tabios failed in his two previous attempts to unseat Zubiri.

Eligan and Mabilog are neophyte candidates but Catarata is considered as one of the prominent politicians in Valencia City, which has a substantial number of voters in the province.

Meanwhile, Zubiri — popularly known as “Nonoy Joe” — is a veteran Bukidnon politician, who is seeking his final term in office as governor of the landlocked province. He is father to Senator Juan Miguel F. Zubiri and Rep. Manuel F. Zubiri of the province’s third district who is also seeking reelection.

Zubiri was the first to file his COC on Oct. 17 under his Bukidnon Paglaum Party (BPP), a local political party.

Malaybalay City Mayor Ignacio W. Zubiri, the governor’s nephew is eyeing a seat in the House of Representatives for the second district.

The elder Zubiri has been assemblyman in Batasang Pambansa from 1984 to 1986. He was elected as congressional representative of the third district of Bukidnon for three consecutive terms from 1987 to1998.