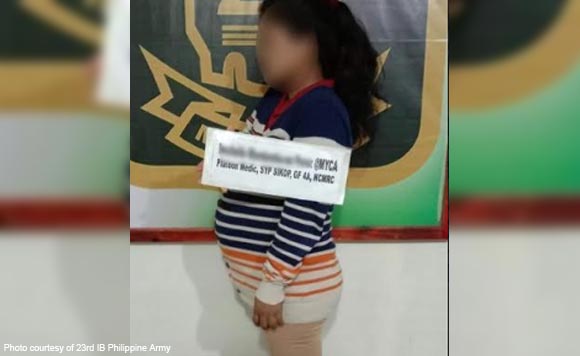 In a press release sent to this writer by 1Lt. Roel T. Maglalang, Civilian Military Officer of the 23rd IB Philippine Army claimed the presence of the pregnant woman was coming from a tip from concerned citizen saying the pregnant suspected member of the New People’s Army was left to the care and attention of NPA supporters or masa which aplenty in the area.

According to the military, government troopers, the pregnant NPA amazon was approached by the soldiers upon knowing her ordeal.

Lina was then brought to the military camp where she was feed and provided her personal needs then proceeded to the hospital for her medical check-up.

Molina expressed his gratitude to the concerned citizen who provide information on the situation and whereabouts of Alias Lina.

“It is indeed heartwarming that another victim of the CPP-NPA is saved. This pregnant woman abandoned by her comrades. We again call on the remaining victims of the CPP-NPA to think about your situation. While you still have time, go back to the folds of the law. Go back and be with your family.” Molina concludes.

Earlier, NPA spokespersons Ka Oto and Ka Amihan Silangan in separate mobile phone interviews with this writers claimed hundreds of indigenous people and ordinary, poor residents of Agusan and Surigao provinces joined the New People’s Army due dire poverty situation with most of them were victims of legal and social injustices.

The two cited slow dispense of the country’s judicial system especially on cases of landgrabbing, human rights violations, trumped up charges and other social injustices like deprivation of basic health care, social amelioration and lack of livelihood opportunities like no available jobs in the region.

They alleged just recently some ordinary residents and some indigenous people in some remote villages in Kitcharao and Jabonga, all in Agusan del Norte province were arrested by authorities on charges they are members and symphatizers of the New People’s Army when in truth some of them were ordinary farmers and abaca hemp weavers.

“ The number one recruiter bringing some Caraga residents especially the poor people to the fold of the New People’s Army are massive corruption in the government, violations of human and basic rights, some are victims of abuses and discrimination and wanton poverty. Contrary to the military claims, the numbers of NPA rebels are dwindling, it’s not true and all lies” Ka Oto and Ka Amihan concludes. (bs)