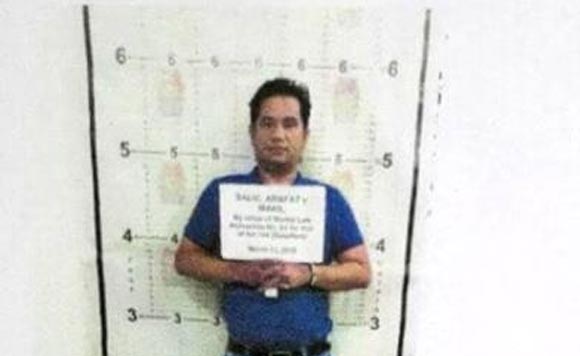 Arrested Vice Mayor Arafat Salic has been turned over to police custody by the Army’s 103rd Infantry Brigade following his arrest Wednesday inside the City Hall compound.

Col. Madzgani Mukaram, Lanao del Sur Police Provincial Office director, on Thursday said Salic will remain in a facility inside the 103rd Brigade Camp in Marawi City for his security.

Mukaran said that shortly after Salic’s arrest, he was brought to Kampo Ranao for questioning by the Armed Forces of the Philippines (AFP), the Criminal Investigation and Detection Group (CIDG), and the Philippine Drug Enforcement Agency (PDEA).

Mukaram said that aside from rebellion, the vice mayor is facing charges related to illegal drugs, murder.

Salic was included in the narco-list of President Rodrigo Duterte.

“He underwent a medical check-up, debriefing and interview with the Philippine Army, the CIDG and the PDEA because of the other charges he is facing,” Brawner explained.

The vice mayor’s arrest initially caused tension in the city especially the latter’s supporters, according to Brawner, who assured that the city’s peace order remains under control.

“There was no resistance from the vice mayor when the troops arrived to arrest him, although he was surprised. He said he did not know about the charges against him but he calmly submitted to our operatives in going to the camp,” Brawner said.

Brawner said checkpoints Salic and several of his relatives were among the almost a thousand individuals charged with rebellion in 2017, following the declaration of Martial Law in the entire Mindanao.

The Martial Law declaration ensued after the siege of Islamic State-linked Maute jihadists on the city on May 23, 2017. (PNA)