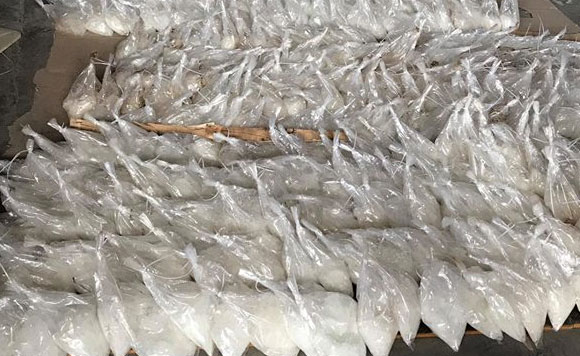 Anti-narcotics operatives here are verifying reports that the P1.7 million worth of “shabu” (crystal meth) seized during a recent anti-drug operation in the Maguindanao town of Datu Odin Sinsuat could be part of the P6.8 billion worth of illegal drugs that slipped authorities in Cavite over a month ago.

“We have anticipated an increase in shabu supplies due to the unrecovered shabu shipment in Cavite recently,” Juvenal Azurin, regional director of the Philippine Drug Enforcement Agency Autonomous Region in Muslim Mindanao (PDEA-ARMM), said in an interview Friday.

Azurin was referring to the magnetic lifters seized in a warehouse in Cavite on Aug. 9 that PDEA Director General Aaron Aquino said contained shabu despite negative results from a swab test.

During an inquiry at the House of Representatives late last month, Aquino maintained that their sniffing dogs could not have erred in detecting the presence of illegal drugs because “a K9 can detect scents 10,000 times as a human being.”

A contradicting report by the Bureau of Customs, however, said the giant magnetic lifters had tested negative during swab testing it jointly conducted with the PDEA and the Philippine National Police.

Despite this, Azurin maintained that they remain watchful of illegal drug operations in their area of operation and at the same time, receptive to reports and orders relayed to them by their superiors.

“The instruction of our director general is to intensify anti-drug operations because of the high possibility that the drugs shipped through the magnetic lifters could have reached our area of operation,” Azurin said.

A third drug suspect, whom Azurin declined to identify, managed to escape by running towards a flea market in Kurintem village.

Azurin said local drug personalities have lately been using marketplaces as a venue for drug deals. “Since marketplaces are oftentimes teeming with market goers, they can easily merge with the people once the deal goes wrong,” he said.

The PDEA-ARMM chief appealed to the public to help prevent the spread of the drug menace by alerting authorities on any illegal drug activities in their communities.

“We need your support, we need your cooperation for us to establish peaceful and lovely communities here,” he said. (PNA)