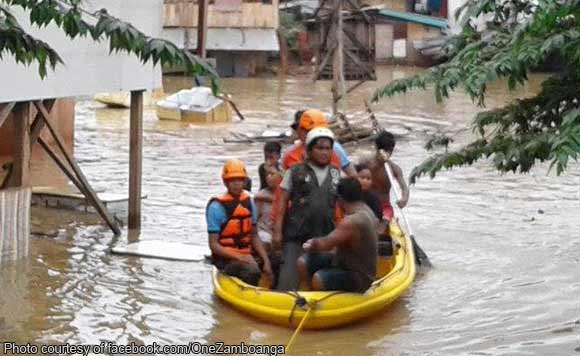 The City Council, in a special session on Thursday, has approved a resolution declaring Zamboanga City under the state of calamity.

Vice Mayor Cesar Iturralde said the resolution was approved on recommendation of the City Disaster Risk Reduction and Management Council (CDRRMC) as this city has been experiencing inclement weather condition the past five days triggering flashfloods in several areas.

The City Social Welfare and Development Office (CSWDO) reported that 3,666 families with 18,330 individuals were displaced by flash flood that inundated 17 of this city’s 98 barangays.

This city has been experiencing heavy downpour coupled with strong winds since Sunday brought about by inclement weather condition triggered by intertropical convergence zone (ITCZ) and with the entry of Typhoon Paolo into the Philippine Area of Responsibility (PAR).

Personnel of the CSWDO have provided assistance and distributed relief goods to the families displaced by the flashflood.

The CSWDO established community kitchens to cater to the food needs of the displaced families staying in evacuation centers.

The CSWDO said that 158 houses were totally destroyed while 327 partially damaged.

Of the seven, Apolinario said four of them drowned; one electrocuted; and, two died when a fig (balete) tree crashed on a semi-concrete house.

The City Engineer’s Office reported that P15 million to P20 million infrastructures consisting of slope protection, shoreline protection and bridges have been destroyed.

The Office of the City Agriculturist reported that PhP45.7 million worth of crops and fisheries as well as poultry and livestock were damaged.

It said that some P30 million irrigation infrastructures were destroyed while 1,150 farmers were affected. (PNA)

13 Maute terrorists killed in Marawi, Año verifying if Mahmud Ahmad is among the dead

3 in a row: CDO tops in local revenues sources among Mindanao cities