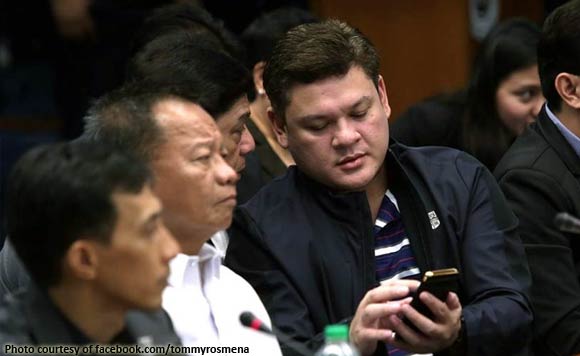 The lawyer of Davao City Vice Mayor Paolo Duterte bared his homophobic tendencies as he went on defense following Senator Antonio Trillanes IV’s dare that the presidential son show his back tattoo.

Rainier Madrid neither confirmed nor denied that Duterte has a tattoo at the back, only saying after the Senate blue ribbon committee’s hearing into the P6.4-billion shabu shipment mess that it is a “fad.”

Asked on Thursday (September 7) whether he has seen his client’s tattoo, Madrid told reporters: “I haven’t seen it because I’m not gay. Siguro if Senator Trillanes said na may pagka-gay siya, I would have changed my mind.”

Citing information from “a foreign country,” Trillanes accused Duterte of being a member of a “triad” or organized crime group involved in smuggling.

He asked Duterte if he has a tattoo on his back, which the vice mayor admitted.

Trillanes then challenged Duterte to show his tattoo so a photo could be taken of it and sent to the United States Drug Enforcement Authority for confirmation of his supposed link to the triad.

The senator said a dragon-like tattoo with “sacred digits” is proof of membership in the triad.

Madrid said he advised Duterte not to show his back tattoo even if the vice mayor wanted to.

“It’s not proper and not good. Baka ma-disbar ako,” he said.

As a litigator, Madrid said it is his job “to control the proceedings.”

“The moment you lose control, you lose the game,” he said.

Referring to Trillanes, the lawyer added: “His game is propaganda. I’m never playing or meeting him head on with propaganda.”

Yummy! Here’s what the triad eats according to Paolo Duterte