Paolo Duterte: ‘Giving in to Trillanes would make me look foolish’ 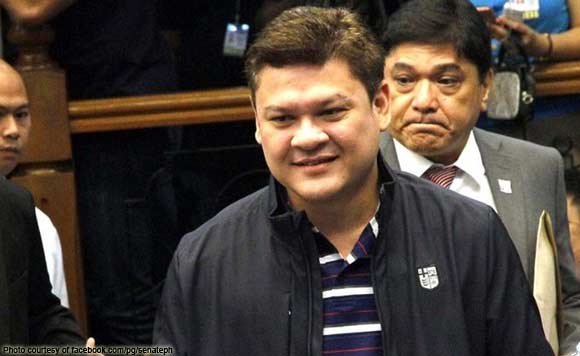 Davao City Vice Mayor Paolo Duterte on Tuesday slammed his critics for hurling corruption allegations against him, including his alleged “dragon tattoo” and an overpriced watch which a viral social media post says he owns.

The presidential son spoke with the media after the state of the city address of his sister, Davao City Mayor Sara Duterte.

During the Senate hearing on the Bureau of Customs’ corruption activities, Senator Antonio Trillanes IV said that Paolo had a dragon tattoo which can prove that Paolo was a member of the Chinese crime syndicate Triad.

But the vice mayor firmly refused the senator’s demand.

He said he followed the advice of his lawyer not to show his tattoo during the Senate hearing, as demanded by Senator Trillanes, because it would make him look foolish.

“When the time comes that he fell to the ground, when his wings were broken because he flew so high, I will show it,” Paolo said.

Paolo also responded to the rumors that he owns an expensive watch.

A viral post on some anti-Duterte and pro-Liberal Party Facebook pages shows a photo of him wearing what looked like an Audemars Piguet Royal Oak Offshore Chronograph, with an estimated price of $38,500 or about P1.92 million.

During the press conference on Tuesday, Paolo took off his watch and urged the audience to “pick up and sell it.”

“If it fetches P1.9 million, you divide the money among yourselves but if nobody would buy it, return it to me,” he said.

He brought out a similar watch from his pocket and said it was an imitation and was only given to him as a gift.