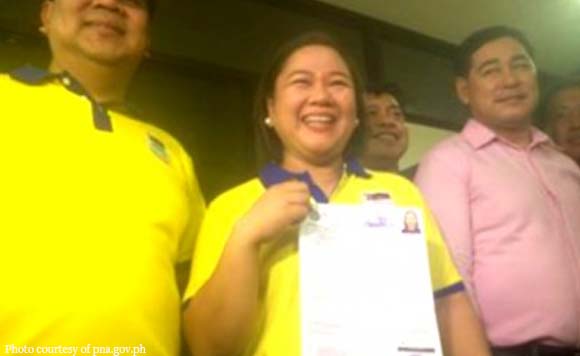 Nograles, who was accompanied by supporters led by City Mayor Ronnel Rivera and several city councilors, was the first aspirant to file a COC in line with the special congressional polls.

“I filed my COC for the second time around. This a continuing fight for the mandate and the voice of our people,” she told reporters.

Nograles originally filed her candidacy for the first legislative district seat of South Cotabato and this city in the last May elections but the voting was suspended by Comelec due to the creation of a separate district for the city, as provided for in Republic Act 11243, an Act Reapportioning the First Legislative District of the Province of South Cotabato.

The law effectively established the city as the province’s third district. The municipalities of Tampakan, Polomolok and Tupi now comprise the first district.

In a press conference late Tuesday afternoon, Nograles said she filed her COC “without prejudice” to her pending petition before the Supreme Court (SC) regarding the cancellation of the polls for the first district.

She said the petition “is still on process” and expressed hopes of eventually getting a favorable ruling on the matter.

“We filed a manifestation with the SC that I am filing my COC without
prejudice to the outcome of the petition,” she said.

Nograles’ camp filed for “Certiorari with Urgent Prayer for Issuance of a Status Quo Ante Order” but no decision came out prior to the May 13 elections.

Three days before the polls, the SC issued a “notice” that it has “resolved, without giving due course to the petition,” to require the
Comelec to comment on the matter within 10 days.

The former vice mayor, who completed her third term last June, topped the polls with 194,929 votes or about 68 percent of the turnout but Comelec declared them as stray.

The other aspirants were former City Councilor Arturo Cloma of the Achievers with Integrity Movement and independents Menchie Dinopol-Cataluna and Abelardo Plaza.

“We will fight for that vote because it is the overwhelming mandate of the people. That vote is worth fighting for,” she said.

“This is just a continuation of the last May elections. Since it was stopped, we decided that she refile her candidacy,” he said.

The mayor said their party is “ready to go” with the campaign and expressed confidence of getting a repeat of the overwhelming result last May 13. (PNA)

Dahil sa decommissioning! Each ex-MILF fighter to get nearly P1M worth of aid from gov’t