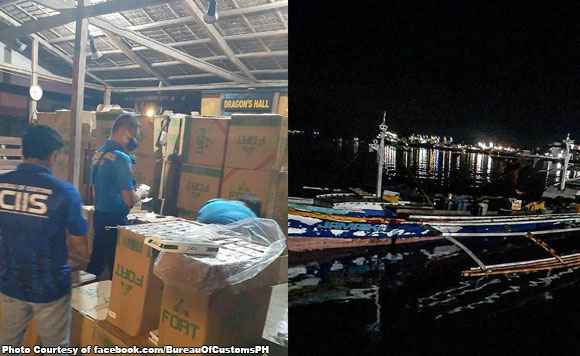 The Bureau of Customs-Port of Zamboanga (BOC-POZ), along with the other concerned agencies, has intercepted P9.6-million worth of smuggled cigarettes off the waters of Manalipa, Zamboanga City.

The BOC, in coordination with the 2nd Zamboanga City Mobile Force Company “Seaborne,” patrolled the waters off Manalipa and conducted a joint operation against a wooden watercraft, which allegedly carried the contraband.

The operation resulted in the successful interception of a motorized wooden boat marked “FB JAMAIKA” with 10 crew members, the BOC said.

Authorities found 275 master cases and 32 reams of cigarettes in the watercraft, which came from Jolo, Sulu, and was supposedly bound for Cotabato City.

The seized watercraft and the master cases of cigarettes are now under the custody of the BOC for proper disposition, the BOC said.