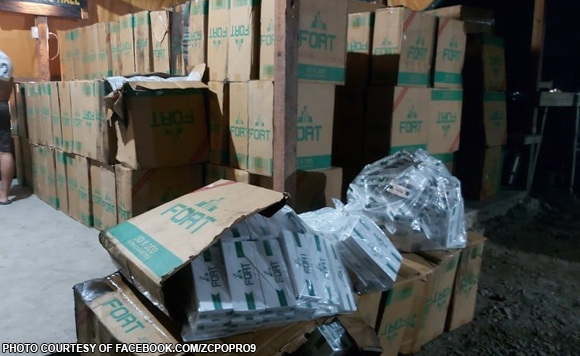 Zamboanga City authorities have confiscated more than P7.5-million worth of alleged smuggled cigarettes off Sinunuc.

The local government said operatives from the Philippine National Police (PNP) and Bureau of Customs (BOC) intercepted the cigarettes without proper documents aboard a watercraft, locally known as jungkong, plying the waters off Sinunuc Thursday, December 2.

In a report copy furnished to Mayor Beng Climaco, Mobile Force Company (MFC) Commander Police Lt. Col. Reynald Arino said the operation was a combined effort of the ZCMFC “Seaborne” and personnel from the BOC, Intelligence and Investigation Service (CIIS) and Enforcement and Security Service (ESS) in line with the intensified campaign on border control against illegal entry and smuggling activities.

Arino said the motorized wooden watercraft was marked MJ/ DS Cruiser and was loaded with a total of 214 master cases and 20 reams of Fort White cigarettes with estimated market value of P7,504,000.00. It came from Jolo, Sulu and was bound for Sinunuc with two crew members, all residents of Jolo. The crew failed to present documents to prove legality of the cargoes.

The cigarettes, along with the crew and the jungkong, were turned over to the BOC for proper disposition after the conduct of visual inspection.