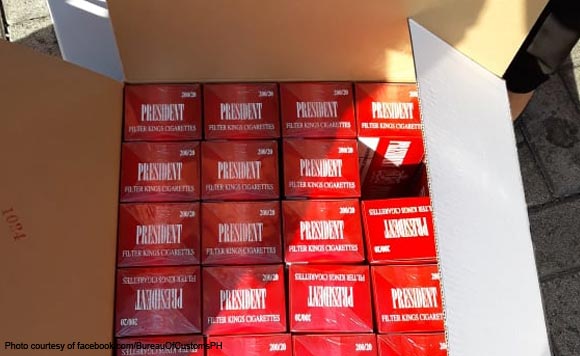 Authorities have seized boxes of illegally imported cigarettes from Vietnam worth P24.8 million in the port of Davao, the Bureau of Customs (BOC) said Tuesday, June 9.

The BOC Intelligence Group, Enforcement Group and Port of Davao confiscated the 1,325 boxes of President brand of cigarettes valued at P24,843,750.00 in coordination with the Interpol.

“The operation was instigated by an advance information at the shipment’s port of origin, prompting the subsequent issuance of an alert order to Vengeur International Trading’s importation,” BOC said.

The misdeclaration was confirmed on June 3 during the 100 percent physical inspection of the 40-footer container van at the Philippine Ports Authority (PPA) container Yard 2.

Sub-port of Dadiangas Collector Elenita Abano said of the shipment’s declared 25,000 brand new corrugated boxes, only 1,100 pieces were found inside the container van.

However, another 1,325 misdeclared boxes of President cigarettes were also discovered inside the same container, she said.

He also recommended the filing of appropriate charges to all those involved in the foiled attempt to smuggle cigarettes into the country including the suspension, if not cancellation of the BOC accreditation of Venguer International Trading, as the importer/consignee of the said confiscated shipment.

Dabawenyos told to be alert with onset of rainy season