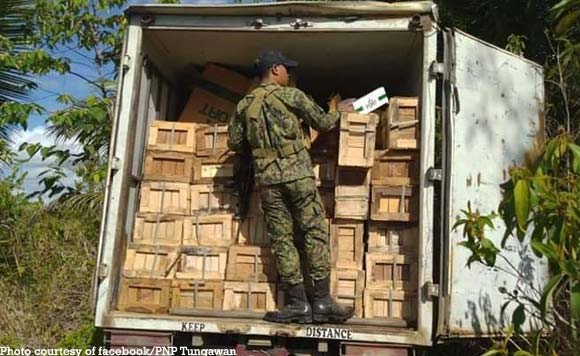 0 389
Share
Want more POLITIKO News? Get the latest newsfeed here. We publish dozens and dozens of politics-only news stories every hour. Click here to get to know more about your politiko - from trivial to crucial. it's our commitment to tell their stories. We follow your favorite POLITIKO like they are rockstars. If you are the politiko, always remember, your side is always our story. Read more. Find out more. Get the latest news here before it spreads on social media. Follow and bookmark this link. https://goo.gl/SvY8Kr

Authorities have confiscated smuggled cigarettes with an estimated amount of P2.46 million in a forested area in Zamboanga Sibugay.

Police Regional Office (PRO) 9 said the 123 boxes of Fort cigarettes covered with 52 boxes of dried fish were discovered in a mini-wing van at the bushy forested area of Purok Panagatan, Barangay San Vicente in Tungawan town at about 1:10 p.m. Thursday, February 20.

The personnel of Tungawan Municipal Police Station (MPS) received the information regarding the loading of the suspected contraband at the port of Barangay San Vicente.

This prompted the police, together with representatives from the Philippine Drug Enforcement Agency (PDEA and the military and local official, to conduct an ocular inspection and validate the information.

The operating team found and arrested a 33-year old laborer and a driver of the vehicle.

The seized vehicle and contraband were brought to Tungawan MPS for proper disposition.