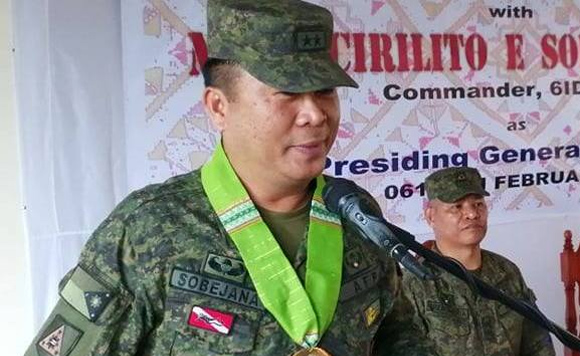 Days after suggesting that it would be prudent to place Sulu under martial law following the deadly twin blasts in Jolo on Aug. 24, Philippine Army (PA) commander Lt. Gen. Cirilito Sobejana on Sunday said he is withdrawing his recommendation as there might be better options.

“I drop my recommendation for martial law declaration over Sulu despite the turmoil as there might be other better options. Besides, I always give due respect to the wisdom of our national leadership and the sentiment of the general public,” Sobejana said in a message to reporters.

The PA commander earlier said it would be best to place Sulu under martial law so that normalcy would return to the province and control the movement of terrorists behind the attack that killed 15 people and wounded 74 others.

Armed Forces of the Philippines (AFP) chief-of-staff Lt. Gen. Gilbert Gapay said there are other options to contain the terrorists in Sulu.

This, he said, includes using Presidential Proclamation 55 where President Rodrigo R. Duterte placed Mindanao under a state of national emergency due to lawless violence after the bomb attack in Davao City that killed 14 people and wounded over 60 others on September 2, 2016 and the newly-enacted Anti-Terrorism Act of 2020.

Despite dropping his suggestion, Sobejana said the military had displayed utmost professionalism and maturity during its martial law implementation in Sulu when he was the Joint Task Force Sulu head in 2017.

Sobejana said massive gains have been made in containing the threats posed by the Abu Sayyaf Group. He cited surrender of 100 of ASG members aside from neutralization of its key leaders, recovery of 1,000 loose and undocumented firearms, and reduction of kidnap victims from 54 to three.

“We remain committed to protect the interest of our Tausug brothers and sisters and the rest of the Filipinos. God bless Sulu and God bless all,” he added. (PNA)