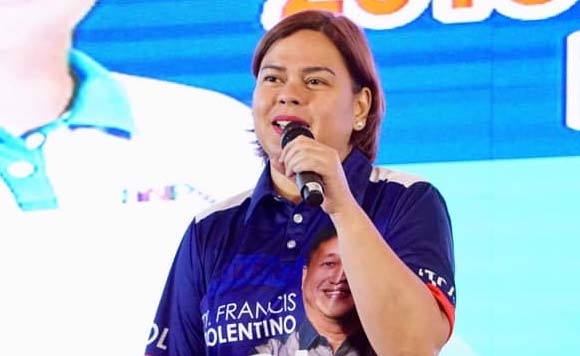 Presidential daughter and Davao City Mayor Inday Sara Z. Duterte has described the opposition Otso Diretso’s senatorial candidates as “lacking in moral ascendancy“ since all of them are not truthful.

During the Hugpong ng Pagbabago’s (HNP) campaign at the iconic “Kalan Banga” landmark plaza here Saturday, Mayor Sara, who is HNP’s campaign manager, said Otso Diretso’s senatorial slate is resorting to “tricks and lies and inaccurate statements about their attacks and stand on social issues.”

“Of course, Diyos ko, kung pwede lang kasi talaga sana, bagal kasi ng internet sa Pilipinas, i-play yung buong recording nung mga sinasabi nila (Oh my God, if we could only, owing to the slow internet in the Philippines, play the entire recording of what they have been saying all along). They’re all tricks and lies and inaccurate statements about their attacks, their stand on social issues. Nobody can claim here na malinis sila (that they are clean), not even the Vice President (Leni Robredo),” Mayor Sara said.

She said no election candidate in the upcoming mid-term polls would qualify if the issue of honesty is raised.

“I said ang honesty, sila mismo (they themselves) are liars. On stage, they give untrue and inaccurate statements, so bakit nila ginagawang issue (so why are they raising the issue (on honesty)?” she said.

“Wala talagang honest sa lahat ng mga kandidato (No one is really honest among all the candidates),” she added.

She said that public office is a public trust and every public official and employee ought to be models of good moral character.

“Kung honesty ang pinagbasehan natin, eh ‘di disqualified tayong lahat (if honesty is our basis, then all of us are disqualified),” she said.

She also disclosed that she had meetings with the HNP senatorial slate, including Ilocos Norte Governor Imee Marcos, on recurring issues, such as the real status of the governor’s school records and degrees.

“Wala akong nakikitang pagkakaapekto sa kampanya (I did not see any effect on the campaign) with regard to the school record of Governor Imee Marcos,” she added.

She also clarified that her statement on VP Leni on the majority of the people’s allegation that Robredo is a fake Vice President still remains based on the people’s judgment even as the Presidential Electoral Tribunal (PET) action on the electoral protest is in progress and that “she may or may not get away with it.”

“I said then when I enumerated what most people thought of calling her a fake VP because of her character and on the electoral protests based on massive fraud against her,” she said.

She estimated that President Duterte’s real votes range from 17 million to 19 million, and not 16 million.

“Tinitingnan natin ang mga boto sa mga senators nila Mar Roxas, makikita kung saan ang nakaboto (We are probing into the votes for the senators like Mar Roxas, where we could trace where the votes are coming from),” she said. “President Duterte lost the votes because these were transferred to other candidates.”

On the opposition bets’ challenge to administration candidates for a debate, Mayor Sara said she would engage them in a debate. However, she said “the problem really is that they are disorganized, they are depressing, they are sad.”

“I am not the secretary of that blackhole. At jinunk ng Comelec ang petition (The Comelec has already junked their petition),” she said.

“They cannot even properly request a debate with Comelec. Wala akong problema sa organization ng debate noong sa simula pa lang (I have no problem with the staging of the debate from the start),” she said.

Comelec has thumbed down the opposition’s petition last Friday for reasons of time constraints and logistics problem.

Mayor Sara also lauded former Special Assistant to the President and senatorial bet Christopher Lawrence “Bong” Go and all HNP candidates, who have shown improvements in their rankings. (PNA)