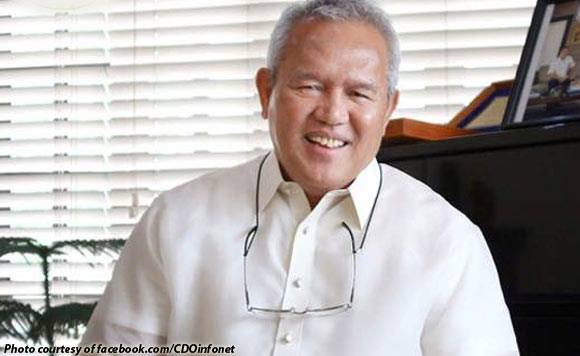 Cagayan De Oro City Mayor Oscar Moreno has been ordered dismissed over the alleged ghost lease of heavy equipment when he was still governor of Misamis Oriental.

Ombudsman Conchita Carpio Morales has ordered him dismissed from service after finding him guilty in an administrative case for grave misconduct, serious dishonesty, conduct prejudicial to the best interest of the service and falsification of public documents.

Apart from his dismissal, he was also meted the accessory penalties of perpetual disqualification from holding public office, forfeiture of retirement benefits, cancellation of eligibility, and bar from taking civil service examination.

With this, Morales also ordered the filing of 18 counts of graft and one count of falsification of public documents against Moreno after finding probable cause to indict him.

Citing a Commission on Audit (COA) Special Audit Report, the rental of the provincial government of Misamis Oriental for 2007 to 2012 “revealed that the road maintenance program of the province received the biggest share of the non-office projects and that the expenses for rental equipment is the third biggest expenditure under maintenance and other operating expenses.”

“The COA also stated that the disbursements for equipment rental were irregular, with transactions amounting to P20,500,000.00 considered as fictitious as suppliers denied participation in the bidding process,” said the Ombudsman.

Apart from this, the Ombudsman also found in its investigation Moreno did not conduct any public bidding for the multi-million peso lease deals and simply resorted to the alternative method of shopping to rent tankers and road rollers while an excavator was procured thru negotiated procurement.

The Ombudsman explained under the Government Procurement Reform Act, Shopping may be used for the procurement of ordinary or regular office supplies or equipment.

Because of the findings, the COA issued several Notices of Disallowance after finding that the “bidding for the rental was simulated or rigged.”

Ombudsman ‘not privy’ on smuggling allegation vs nephew