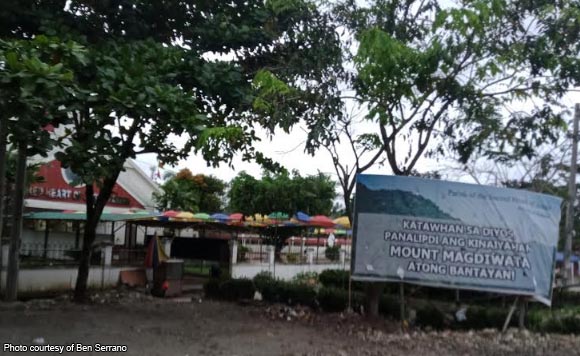 SAN FRANCISCO, Agusan del Sur- The Office of the Government Corporate Counsel is now taking the cudgels in the decades old effort of San Francisco Water District to save Mt. Magdiwata watershed. The OGCC filed last December 18, 2019 a Manifestation or Opposition to the on-going application of Certificate of Ancestral Domain.

The LGU-San Francisco and the Omaubao Manobo tribe cited several attempts for destructive mining activities within watershed or within perimeter boundaries of the declared watershed areas.

POLITIKO was furnished authenticated copies of the opposition.

It is the only source of potable water supply of the growing in population and progressing San Francisco town.

San Francisco Water District Board of Directors passed various resolutions for the protection of the watershed like Resolution No. 7, s. 2013 “ Strongly Opposing Mining Operations and Requesting for the Immediate Cancellation of all Mining Applications and Permits Granted by Concerned Government Agencies within the One (1) Kilometer Distance from the Boundary of Mount Magdiwata Watershed and Forest Reserve.

Then Agusan del Sur Governor Adolph Edward Plaza now a congressman and present Governor Santiago Cane promised protection of the watershed as it was the only source of potable water supply of growing and business hub town of San Francisco.

Opposition has also mounted over the inclusion of the protected Mt. Magdiwata watershed here in the 7,800-hectare ancestral domain being claimed by the Manobo tribe.

The tribe, through Oyay Mansaloay Antod Ogow Bando Ugong (Omaubao) Tribal Clan Organization, has applied for a CADT over the area which, when granted, empowers it to have primary say over resource use.

Luzon feared destruction of the watershed if its use would be left to the
discretion of the tribe. He said the tribe’s leaders reportedly consented to the entry of mining operations in the area without regard to other users.

Mineral exploration and production plots circled the Mt. Magdiwata watershed area, based on a mining tenements control map of the Mines and Geosciences Bureau in the Caraga region.

SFWD worked in the last three decades to rehabilitate the watershed, which was a logged-over area.

From what used to be only 41 percent forest cover (695 hectares), its greening initiatives brought it to 95-percent coverage today.

But Bardo “Datu Hag-um” Bando, one of Omaubao leaders and a town councilor sitting as indigenous peoples mandatory representative, assured residents that they would not damage Mt. Magdiwata.