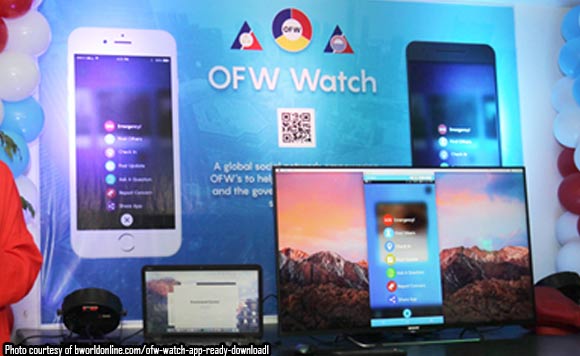 0 499
Share
Want more POLITIKO News? Get the latest newsfeed here. We publish dozens and dozens of politics-only news stories every hour. Click here to get to know more about your politiko - from trivial to crucial. it's our commitment to tell their stories. We follow your favorite POLITIKO like they are rockstars. If you are the politiko, always remember, your side is always our story. Read more. Find out more. Get the latest news here before it spreads on social media. Follow and bookmark this link. https://goo.gl/SvY8Kr

Overseas Filipino workers (OFWs) now have a platform to empower and protect them, after the unveiling of a mobile social networking technology called OFW Watch Mobile App.

In partnership with the Department of Labor and Employment (DOLE) and the Overseas Workers Welfare Administration (OWWA), the new app features the “Find Others function” and the “Volunteer Switch”.

The “Find Others” feature uses geo-location data to connect the user with other OFWs, expats and community groups nearby. Profiles of nearby users including links to their social networks such as Facebook are used to facilitate a connection if both parties mutually agree. There is tight integration of the feature with Google Places’ “Check In” function that helps identify popular and safe locations nearby.

The “Volunteer Switch” function when flipped makes the user part of a global network of Overseas Filipino Volunteers.

As a volunteer in the network, the OFWs may receive alerts if a kababayan nearby is in trouble or may be alerted for assistance in sharing critical information with other nearby Filipinos and via their public social network pages.

Myrna Padilla, a former OFW and currently president and founder of OFW Watch, said the mobile app was launched in Hong Kong last year as a pilot project to see what needs to be enhanced based on the users’ feedback.

“We are eyeing to reach countries where our OFWs are. This is already accessible on both android and IOS,” said Padilla, who worked abroad for over 20 years.

For safety and protection the app also contains an “Emergency SOS” button to report concerns of abuse or maltreatment as well as the ability to ask questions on any subject related to OFWs’ stay overseas.

Representative Aniceto Bertiz III of ACTS OFW Partylist said his group reported to President Rodrigo Duterte that there were more than 20,000 displaced workers as of June 2016.

Bertiz said these are OFWs who were neglected by the past administration and were not given assistance as majority of them do not know whom to approach.

OWWA deputy administrator Brigido “Dodo” Dulay said the app started with the signing of a Memorandum of Agreement between OWWA and Ms. Padilla, believing that the new technology can help OFWs.

Other features of the app include the Work Journal for OFWs to record working conditions.

The OFW can post status updates, photos, and videos in situations involving distressed OFWs, and these private work journals can be remotely monitored by DOLE, OWWA, or the Philippine Overseas Labor Office (POLO).

“In terms of security, all communications between the OFWs and the servers are encrypted; with regards to the pranks meron po tayo (we have) administrators and it still an ongoing test for us also,” said Paul Domag, project manager.

The app serves as host to an extensive Resources Library including directories of all the Philippine Embassies, Consulates, OWWA, POLO offices, maps, FAQs and access to dozens of programs and mini-websites including currency, converters, language translators, language lessons, tips and more.

DOLE Undersecretary Joel Maglungsod said that after Davao, the OFW mobile app will be launched in the Middle East where there are many distressed OFWs.

He said the common problems of OFWs in the Middle East are repatriation and abuse. (Philippine News Agency)

Alvarez: No more IRA under federalism; poor regions to be grouped with rich ones