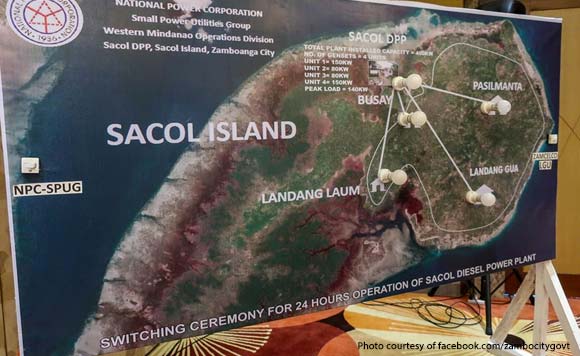 0 129
Share
Want more POLITIKO News? Get the latest newsfeed here. We publish dozens and dozens of politics-only news stories every hour. Click here to get to know more about your politiko - from trivial to crucial. it's our commitment to tell their stories. We follow your favorite POLITIKO like they are rockstars. If you are the politiko, always remember, your side is always our story. Read more. Find out more. Get the latest news here before it spreads on social media. Follow and bookmark this link. https://goo.gl/SvY8Kr

Some 500 households in an island in Zamboanga City will be assured of a 24-hour power service once a P25-million diesel power plant becomes operational, the city government said.

This as the National Power Corporation (NPC) officials, together with Acting Mayor Rommel Agan and District 2 Representative Mannix Dalipe, led the ceremonial inauguration of the Sacol diesel power plant at a local hotel Friday, November 8.

The 500 households to benefit from the project came from four barangays in Sacol Island – Landang Gua, Pasilmanta, Busay and Landang Laum.