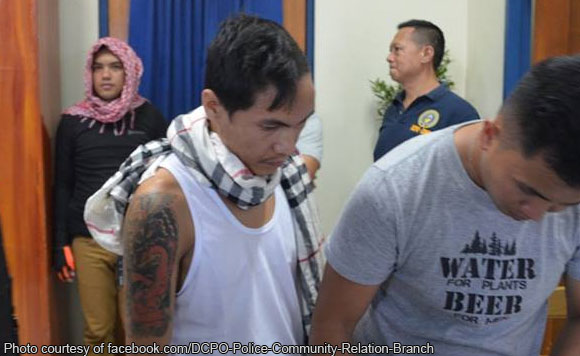 The New People’s Army (NPA) leader in the Davao region was moved to this city on Tuesday after almost three weeks of treatment for gunshot wounds in the neighboring province of Bukidnon, a police official said.

Fearing reprisal, Cañete’s mother, Babeta, admitted in an interview she was nervous of his son’s transfer to DCPO because she’s the only one allowed to watch over him.

But Chief of Police Senior Supt Alexander Tagum was adamant that the NPA leader would remain at DCPO until a commitment order was issued by the court..

“We will immediately turn over all these warrants of arrest and expedite the transfer of the venue for custody of Kumander Jinggoy. As much as possible we will commit him,” Tagum said.

Tagum said the police would implement full security measures commensurate for high-ranking NPA leaders such as Cañete, adding that visits from relatives would not be allowed except for the NPA leader’s mother.

Tagum told reporters Tuesday afternoon that warrants of arrest were issued by the three different branches of the Regional Trial Court against Cañete for 12 criminal cases, mostly for murder, serious illegal detention and robbery in band. No bail is recommended for most of the cases.

“In 12 warrants of arrest for the cases he is facing in RTC XI, five of it are non-bailable,” he said.

Cañete was re-arrested last May 12 while undergoing medical treatment of gunshot wounds sustained during an encounter with government forces on May 10 in Sitio Linao, Barangay Kipilas, Kitaotao.

Cañete was first arrested in 2010 in an encounter with government forces. He was then allowed by the military to recover from his wounds sustained during an encounter in Montevista, Compostela Valley province but, he jumped bail in 2013 for the murder and arson cases filed against him.

Tagum said the arrest of Cañete was a big blow to the NPA operating in Davao region, even as the police official warned leftist groups against holding rallies that would disturb peace and order.

”It is their right to conduct a rally but I would like to warn them that there are particular areas allowed for that – at the freedom park. If they will affect the traffic and affect the local peace and order baka isama naming sila sa kulungan kasama si Ka Jinggoy (we might bring them to prison with Ka Jinggoy),” he said.

Cañete’s group was held responsible for the death of fish vendor Larry Buenafe, who died after sustaining wounds from an NPA-planted landmine intended for the responding soldiers during an attack of a Lorenzo-owned facility in Barangay Mandug on Apr. 29, 2017.

Cañete also stands accused of burning the equipment being used in the ongoing bypass roads in Barangays Mandug and Fatima in Paquibato. (Rhoda Grace Saron/PNA)